What is half resolution?

In previous posts on 3D I have discussed how passive 3D TVs are only half resolution because half the original data is thrown away. That no longer seems to be the case with LG TVs with a recent firmware upgrade, or with new 2012 model LG TVs.

As a building block towards greater understanding of the effects of passive 3D TV, I want to look a bit more closely at how presenting a picture at half the original resolution effects things subjectively.

Now look at the animated GIF to the right. I created a black on white graphic in Photoshop, with two hard slopes. Not too hard because I set Photoshop to anti-alias the edges. That is how I would expect movie content to be presented: anti-aliased. In the animation this graphic is labelled ‘Orig’. Then, taking this, I duplicated every second line as a naive half-resolution process. This more or less represents the effect of what one eye would see with the original passive 3D TV process: half the data thrown away. This slide is labelled ‘Dupl’. Finally, I took the original again and removed every second line, replacing it with a new line interpolated from the line above and the line below. This one is labelled ‘Interp’.

As you can see, the Duplication process introduces clear jaggies to the left hand slope, which is nearer horizontal, and less visible but still present jaggies to the steeper right hand slope. In the Interpolated version, the left hand jaggies are still present, but softened somewhat, while the right hand jaggies are almost entirely invisible, if present at all.

Here are close details of those three images, blown up to 300%, so you can see what the process did: left is original, middle is duplicated lines and right is interpolated lines.

A process with some form of vector recognition might do a better job on allocating the grey pixels to smooth the line, but that seems unlikely to be happening in a passive 3D TV.

What appears to be actually happening in the TVs which do 3D at 1080i is that the left eye sees all 540 left hand odd lines as a package, and then all 540 left hand even lines as package, shown one after the other on just one set of 540 lines. Likewise for the right eye.

The switching between the odd and even packages must be fast. There was no sense of flashing at all when I was closely examining the TV. The picture was rock solid. There was no flickering between lines either.

Clearly there would be flickering unless the alternation between the two was so fast as to become imperceptible, either due to persistence of vision, or what we might call persistence of LCD status (ie. the change takes less time than the response time of the LCD pixel).

What would it look like in that case? I’d say that the two new fields — one with the doubled odd lines and one with the doubled even lines — would simply merge. I replicated this by pasting one over the other at 50% opacity. Here is an animation which switches between this new creation, and the original graphic.

Let me repeat, the jaggie part of this was created by merging the repeated odd lines version with the repeated even lines version. There was no misalignment. Now we can see why jaggies still appear on the wings of dog in the menu of Cats and Dogs 2.

And here is the 300% zoomed-in point of this graphic of the doubled then merged odd and even lines version (right) next to a zoom of the original graphic (left). 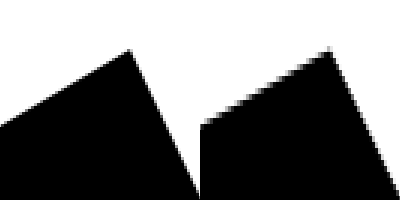 , the title question: is this half resolution? It’s looking pretty much like that to me.

Incidentally, with the odd and even lines of each field effectively merged under the new processing system, then there is no way that the full resolution of the picture can be reconstructed in the brain. Both eyes see blockier versions of what they are supposed to see, and build up their composite image based on that, with no ability to extract the now lost detail.

This entry was posted in 3D, Testing, Video. Bookmark the permalink.

1 Response to What is half resolution?