Sorry, but it is half vertical resolution

A new commenter on an old post claims, quite sharply, that my statement that LG passive 3D TVs are ‘half resolution on 3D’ is not correct. He says: ‘The brain combines the image for full HD def. Anyone with a set of eyes working properley can see this and if they compare.’

He links to a very thorough comparison review of a couple of active 3D TVs and a couple of passive 3D ones. It’s a fascinating review, especially on the subject of crosstalk rejection, with actual hard measurements, and well worth a read. But the piece is not perfect by any means, particularly on the question of passive 3D resolution.

The theory and fundamental principle behind full FPR vertical resolution and sharpness is that the 3D TV images have only horizontal parallax from the horizontally offset cameras, so the vertical image content for the right and left eyes are in fact identical – but with purely horizontal parallax offsets from their different right and left camera viewpoints. So there isn’t any 3D imaging information that is missing because all of the necessary vertical resolution and parallax information is available when the brain combines the right and left images into the 3D image we actually see. So as long as the viewing distance is sufficient so that the raster lines are not visually resolved (for 20/20 vision the visual resolution is 1 arc min, which corresponds to 6.1 feet for a 47 inch TV) the brain should fuse the images from the right and left eyes into a single full 1080p resolution 3D image. One important detail to note is that there are actually two entirely equivalent odd-even and even-odd line pairings for both the right and left FPR images, so both FPR TVs alternate between them at their full Refresh Rate. This also eliminates image artifacts that would result from picking just one pairing or the other. (my emphasis)

The problem is that it is based on an incorrect premise. If I am reading this correctly, it is saying that you are getting the odd lines with one of your eyes, and the even lines with the other. The only difference between the two is horizontal positioning, so your brain is able to recover the full vertical resolution of the image.

But this is, in fact, wrong. Passive 3D TVs show the same lines for both eyes in 3D mode!

So with your 1080p 3D TV, when you are wearing the glasses — even if it is displaying a 2D picture — your left eye is seeing only every second line, as is your right eye. That is, half vertical resolution.

When you’re watching 2D, but foolishly wearing the 3D glasses, your left and right eye are actually seeing different signal lines, which is pretty much what the referenced article is saying that happens in 3D. Here’s what that looks like. I took close up photos of a diagonal black bar on a white background displayed on an LG 47LW6500 3D LCD TV. At the top it is directly from the screen. At the bottom it is through the left lens of the 3D glasses. As you can see, every second line is zapped through the glasses: 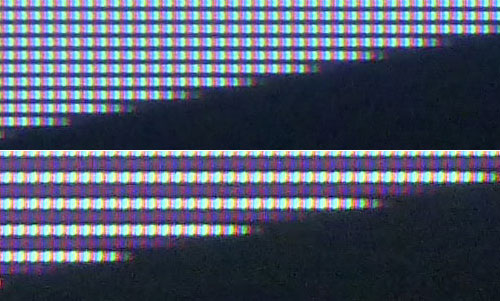 I simply assumed that that is indeed what happened with 3D signals as well. But that is not the case.

Let me hasten to add that most of the time, with most content, the 3D produced by a passive TV actually does look smooth and fully detailed. 540 pixels of vertical resolution, delivered progressively, is still pretty damned good. But, nonetheless, it is half resolution, because here’s what a passive 3D TV actually does.

(I can’t remember if the left eye is odd or even, so I’ll just assume that it gets the odd-numbered lines in what follows here.)

In other words you are seeing only the odd numbered lines for both eyes when in 3D mode.

(Or only the even numbered lines if I’ve got this arse-about.)

Either way, every second line of data is thrown away for both eyes.

Now I have asserted this, and Dr Raymond M. Soneira, the author of the referenced article asserts otherwise. Truth is, he knows a lot of stuff that I don’t know. I learned a great deal from reading his article. But I think he is incorrect on this point.

I was heartened to see that in his piece he recommends some specific content to check out his view. So I’ll do the same. I recommend the Blu-ray 3D version of the thoroughly mediocre movie, Cats & Dogs: The Revenge of Kitty Galore. I have the one from the Australian distributor Roadshow Entertainment, but from the look of it I’d hazard a guess it is identical to the US Warner Bros version.

Fortunately, you don’t actually have to watch the movie. All you have to do is start the disc and look at the main menu:

This is a weird one. It is 24fps frame packed 3D, just like the content, but about seven eights of the picture has no 3D effects. It is a flat panel with no left/right offset. Only the bar across the bottom of the screen, and the menu selections on that bar, are 3D. Here’s a section, less shrunken, in which the left-right imaging of the menu is clearer: 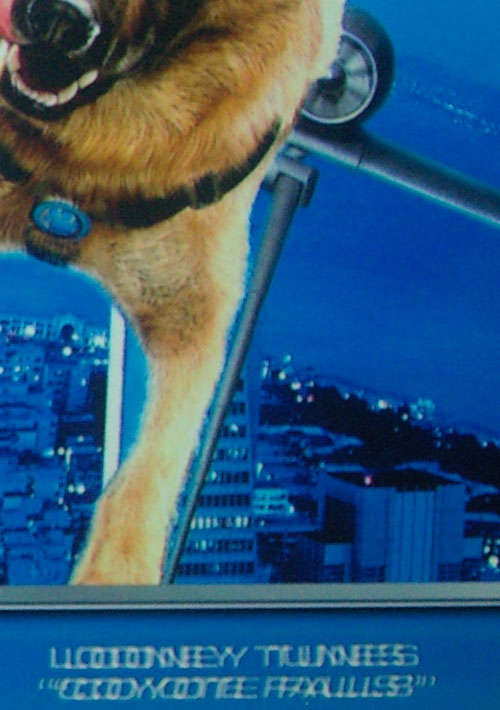 Notice, the dog has no imaging doubling. It is resolutely stuck in 2D, as is the entire frame above that silver bar just above the menu.

Now here’s the rub: this makes an ideal 3D test pattern for resolution. The photos above I just took a couple of minutes ago from this menu displayed using a JVC 3D projector. But I when was reviewing a passive 3D TV — the Toshiba REGZA 47VL800A (which uses an LG panel) — those airplane wings were horribly jaggie. The fur on the dog was broken up and dotty. The horizontal strokes on the menu lettering were of inconsistent vertical thickness, as though some scan lines had been randomly removed.

This was with the TV in 3D mode, me examining the picture through the supplied 3D glasses, at a range of about 2.5 metres.

So we have jaggies when watching hard-edged diagonals presented flat in 3D mode. That doesn’t necessarily prove that the same line numbers, left and right, are being presented as alternate line numbers on the display.

Except that the jaggies were identical when viewed without any glasses at all! That’s what gives this menu its power in disclosing what’s going on. Because it is static, your brain can’t interpolate stuff over time. You just see what’s there. And what’s there is only every second line — the same line for both images.

I was appalled. It was clear that half the scan lines were missing. It had been four months since I’d reviewed the LG set, but I hadn’t noticed any oddities of this nature on it. So I jumped to the conclusion that Toshiba had screwed up the 3D implementation. But one should test one’s theories, so I jumped into the car and drove to a Harvey Norman which had a 60 inch 3D LG set up, and prevailed on them to let me test out this disc on that TV. And the behaviour was exactly the same as that on the Toshiba.

So I feel justified in saying that you really do get just half the vertical resolution on a passive 3D TV. Why Dr Soneira got different results, especially with small-sized text which seems extremely persuasive to me, is a mystery to me. I shall attempt to contact him by email and see if he has any views on this post.

I’ve put a very long sidebar I did for the Toshiba TV review below the fold. This explains my theory again in different words, in case the above is unclear.

And, by golly I’m irritated that I didn’t apparently take a photo of the Toshiba screen showing this.

The essence of 3D is that each of your eyes sees a slightly different image to the other. Most 3D TVs manage this actively, by flashing the left and right images alternately, and allowing each eye to see — and only see — the matching image by actively flashing eyewear opaque and transparent in synchronicity with the picture on the screen. With some technologies and some content, some sensitive viewers can find this causes discomfort.

The passive system shows both the left and right eye images on the screen at the same time — but only half of each. Every second row of pixels from each image is discarded and what is left from the two eye views are interleaved together. If you’re not wearing the necessary eyewear, you see both the left and right views as ghosts of each other.

But each horizontal row of pixels on the screen is polarised. The odd numbered rows are polarised one way, and the even numbered rows the other way. The passive eyewear has lenses with each eye having one of the two polarisation patterns. That way, each eye only gets to see the horizontal pixel rows it is supposed to.

There you go: two eye views delivered to the correct eyes, with no flashing involved.

Unfortunately, something else is lost: resolution. Horizontal resolution remains the same as always, but vertical resolution is halved. With Blu-ray 3D, that means it is reduced from the usual 1080 lines to just 540.

If you don’t need to sit too close to the screen, that can be a tradeoff worth having. Aside from eliminating flicker, the crosstalk performance (ie. the amount of left eye content leaking through to the right eye and vice versa) tends to be very good.

Sometimes performance is worsened by what I suspect is a design defect in these passive systems.

Remember, the picture consists of two grids of pixels. One, typically, of 1,920 by 1,080 is for the left eye while the other is for the right. Both lose every second row in a passive system.

This means that all the even lines are gone, never to be seen. That means that there are jaggies in all circumstances — even in sections of the picture in which there is no 3D effect, and in which both the left and right eye views are identical. For example, on the main menu screen of Cats & Dogs 2: The Revenge of Kitty Galore the background image is flat, although the menu bar at the bottom of the screen sits forward. In this background image there are marked jaggies on the diagonals. Mind you, these jaggies are there even if you are not wearing the 3D glasses.

Had the 3D system used the odd numbered rows for the left eye and the even number rows for the right, then there would have been no such jaggies.

But I suspect that this is a price you have to pay for effective 3D with this passive scheme. Delivering odd numbered rows to the left eye and even numbered rows to the right could well result in the 3D effect being distorted significantly. I discovered this on the Toshiba passive 3D TV, but went in to my local Harvey Norman and confirmed that the performance on an LG passive 3D TV was the same.

In the end, the only real solution to this will be panels that double vertical resolution to 2,160 rows. Then flicker free passive 3D can be delivered with no loss of resolution.

This entry was posted in 3D, Blu-ray, Equipment, Testing. Bookmark the permalink.

12 Responses to Sorry, but it is half vertical resolution