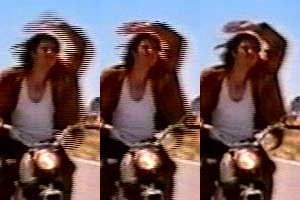 Well, there you go. It looks like I don’t have too many readers after all! Or none, anyway, that have any spare VHS tapes. Happily charity came to the rescue. More to the point, I went to the Salvation Army and St Vincent de Paul’s op shops today and found some prerecorded VHS tapes. Brilliant! What I found were Independence Day and Entrapment. I have the first on Blu-ray already and am seeking the latter. These cost me the princely sum of $5 in total. I also purchased The Untouchables because I thought this also was available on Blu-ray, but I was in error.

So I plugged the output of the VCR into the composite video input of my video capture card (no point trying to do this with a DVD recorder because it’s almost certain that the VHS tapes are macrovision encoded) and started recording. I did a little test, first, on a random section of video just to make sure it was all working okay. It was, sort of, but there was heavy interlacing. There was no good reason for that. Except that I remembered that the first DVD release of Independence Day had exactly the same problem. For confirmation I recorded on my computer snippets from each of the other two tapes I purchased, and neither had this problem.

That’s going to slow things up. I am not aiming to compare any specific VHS with DVD and Blu-ray, but rather to do a more general format comparison. That’s why I am also seeking Entrapment on Blu-ray. That means I need to present VHS at its best. So I have to extract the opposite fields from adjacent VHS frames and weave them together myself. Damn.

Even then, as you can see from the weave I’ve done here, there’s still a slight misalignment, that being the nature of VHS. Interframe stability isn’t very high. I tried sliding the two fields a little left and right, but it generally made things worse. That picture has a detail from an original VHS frame to the left, the same section from the next VHS frame in the middle, followed by my manual weaving together of the matching two fields from those frames.

What is amusing is that at the start of this tape is a boast contained in the following two frames:

UPDATE (Friday, 22 August 2008, 9:56 pm): The plot thickens. If you read closely my coverage of the interlacing problems with the Independence Day DVD, you will see the following:

Interestingly, unlike the next two movies we shall look at, Independence Day does not have this problem all the way through. It appears in perhaps half of the movie, but there are plenty of scenes recorded properly. For example, most of the airfight scenes look okay. And the scenes featuring Will Smith at his girlfriend’s house before he notices the spaceship are magnificently recorded.

So I get to the section of the movie on VHS featuring Will Smith at his girlfriend’s house, and what do you know? No interlacing! What does this tell us? Well, nothing for certain, but it does seem very likely indeed that the original PAL DVD and the PAL VHS were derived from the same telecine of the film. The masking for the different aspect ratios of presentation (the VHS is in 1.33:1 while the DVD is 2.35:1) must have been conducted after whatever it was that caused the field reversal for large chunks of the movie.