The Same Encode, But Different

While coverting old posts to the new blog, I happened to re-read one I did on Superman Returns, back in July 2008, called ‘Wasting Digital Real-estate‘. In this I theorised that ‘it looks like an identical encode was used on the feature for both’ the HD DVD and Blu-ray versions.

Last night, I thought I’d let the computer confirm that. So I extracted the first thousand ‘I’ frames from each of the two versions — the HD DVD and the Blu-ray. Modern compression systems save space by only recording a small proportion of the film frames in (lossily compressed) full. The other frames are encoded as additions to or subtractions from those. Those complete frames are called ‘I’ frames, or ‘anchor’ frames.

I extract the frames from both formats using the same software, and save them to my hard disc in *.png format, which is a non-lossy compression format, using the same parameters. I figure that if the same frame from each format is identical for a goodly number of frames, then the video is almost certain the same as well. There is a small chance that the frames between ‘I’ frames differ, but it seems unlikely.

How do I check if the frames are the same? Simple: I use the DOS ‘fc /b file1 file2’ command. There are advantages to being old enough to have learnt about computers in the pre-Windows days!

If the result of this command (delivered in a ‘Command Window’) is ‘FC: no differences encountered’, then the files are identical bit for bit.

That was indeed the case for the first 28 ‘I’ frames of the thousand I extracted. But ‘I’ frames 29 and 30 were different. These occurred about 15 seconds into the movie, during the fadeout of the Warner Bros logo. In the following graphic, the top part is frame 29 from the HD DVD, and the bottom one is the frame 29 from the Blu-ray (I’ve trimmed the black area from them both): 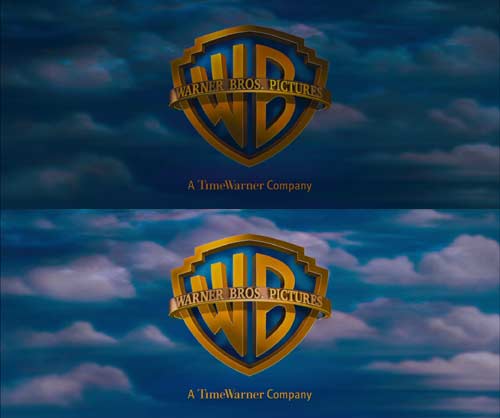 Clearly the HD DVD frame is slightly later than the Blu-ray. But at frame 31, both are back in sync and all frames are identical. For a while, that is. Around frame 370 (3:22 into the movie) things go haywire and the frames are quite out of sync with each other, and thus unable to be compared.

What am I to make of this? I’ve generally assumed that Warner Bros has tended just to port the video element of its HD DVDs to Blu-ray. After all, the gross measures have been pretty much the same, and the video quality appears subjectively much the same.

But if that were the case then every frame would be identical between the two versions, not merely 97% of them. You can’t just add or subtract ‘I’ frames from an existing VC1 encode without doing major damage to the whole thing, because so many of the frames are dependent upon them.

So I suspect that the Blu-ray and HD DVD were independently encoded from the same HD digital master, presumably by software built into the respective authoring packages, with the same settings applied.

The small differences then would be due to the idiosyncracies of the authoring software.

At a guess, anyway.

I’ve previously taken Warner Bros titles to be simple ports, as in this examination of Corpse Bride. But the frames I compared in that comparison may have just been part of the 97%, or whatever it was for that movie.

1 Response to The Same Encode, But Different