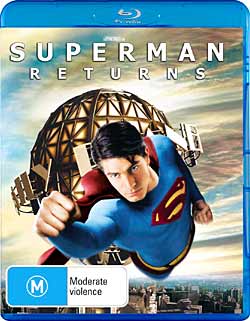 The excellent Blu-ray section of High-Def Digest is a frequent stopping point for me, especially its reviews. The reviews are usually pretty well done, but they do contain the odd error, often due to the difficulty of obtaining valid information in these early years of high definition video.

For example, in its review of Superman Returns, it says:

Warner gives us another 1080p/VC-1 encode, and it’s on a BD-50 dual-layer disc to boot. In raw tech specs, that gives it more room to play around in than its HD-30 dual-layer HD DVD counterpart. Picture quality-wise, however, it is another wash between the two formats. I picked a few scenes to compare fine details, including Clark’s visit back to Smallville, the fabulous “Lois rescued from fiery airliner” crash and Superman getting the poop beat out of him by Lex and the gang. Both the Blu-ray and HD DVD deliver excellent pictures, and I’d be hard-pressed to find any Superman fan who would be disappointed.

Perfectly reasonable, but entirely wrong. Certainly the Blu-ray is a dual layer disc, as is the HD DVD. And the HD DVD has the same content as the Blu-ray, plus a Dolby TrueHD audio track

omitted from the Blu-ray. At an average of over 2Mbps, this must use well over two gigabytes all on its own. But here’s the thing. The entire content of the HD DVD version amounts to 27.48GB. While that for the Blu-ray version totals 26.92.

I’m going to assume that Blu-ray has slightly higher overheads than HD DVD, because to me it looks like an identical encode was used on the feature for both. I’m not saying anything is wrong with that. The picture quality looks pretty good to me. But I do wonder if it may not have been even better had an extra ten or fifteen gigabytes been devoted to the video, rather than being left unused on the disc.

Of course, you wouldn’t know that unless you had some way of examining the discs. I presently have an LG BE-06 Super Multi Blue disc drive plugged into my computer (no link on LG’s website for some reason), and this allows me to do just this.

I was planning to write a little about how packaging errors are creeping into Blu-ray as well, but in doing so, things suddenly got complicated. 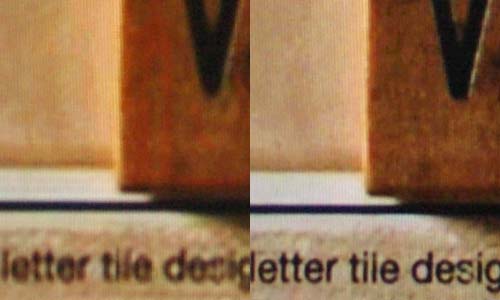 You see, there are a dozen deleted scenes on both versions of this movie amounting to about 16 minutes of run time all together. Both, according to the packaging, are presented in ‘1080p High Definition’ (see photo above from the Blu-ray box). But I noticed that they pretty clearly were not. In fact, they are presented in 480i. Not just in 480i, but in 480i30, so that two out of every five frames are actually composite frames made out of two adjacent film frames.

That was the point I was going to make. Silly Warner Bros, getting that wrong. But then the thought occurred to me: what about the HD DVD? So I checked, and its deleted scenes are indeed presented in 1080p24. In fact, the Blu-ray uses MPEG2 encoding at a fairly low bitrate for these in its 480i presentation, while the HD DVD uses VC1 at in excess of 10Mbps. The picture shows a photo of a section of one of the special extras. The part to the left is from the Blu-ray and that from the right is from the HD DVD.

So now I’m puzzled. If WB wanted to save money by just doing the one encode on the feature, why would it do a separate encode for some of the special features? Or did it simply lift the extras from the US special edition DVD? These all appear on Disc 2 of the Australian DVD release (in PAL format, of course).

This isn’t the only ‘Superman Returns’ packaging error. The back of the HD DVD says that the run time for the movie is 151 minutes when it is, as correctly stated on the back of the Blu-ray, 154 minutes. Even the PAL DVD gets it wrong. It says that the sound for the feature is in ‘English 5.0 & English 2.1’ when clearly they mean 5.1 and 2.0. They are only the things that kind of leapt out to me.

This entry was posted in Blu-ray, DVD, HD DVD, Rant. Bookmark the permalink.