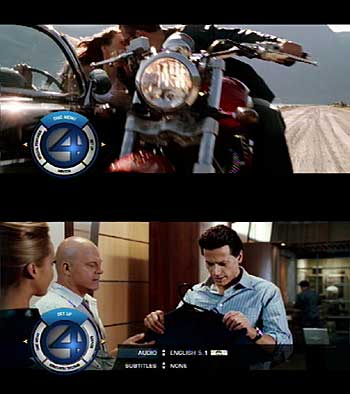 Blu-ray has many wonderful things going for it, especially the sheer detail of the picture quality (more on this on another day). But one of the coolest things for me are the pop-up menus.

Blu-ray is capable of delivering three separate video layers. One of these is typically used by subtitles, so that leaves two. What do you do with them? Well, the main one can run the movie, while the other one can have pretty much anything over the top of it (including video commentary). So far, this has been used for popup menus.

With DVDs you have to return to the main menu if you want to, say, access the scene selections or the language menu. With Blu-ray, you don’t need to do this at all. Just hit the ‘popup menu’ key on the remote, and the main menu appears overlaid on top of the movie, even while it continues to run.

To the right are a couple of screen shots from Fantastic Four, with the pop up menu right over the top of the movie. The top one shows the menu, while the second shows the audio selections invoked from that menu. All the while the movie proceeded regardless. (In reality, the menu quality is better than shown here. I used a composite video connection from the Panasonic DMP-BD10 Blu-ray player to grab these pictures, and the quality is pretty mediocre from that.)

FF is on a 20th Century Fox BD (Blu-ray disc). They have sent me three others: Kiss of the Dragon, Kingdom of Heaven and The Transporter. FF is implemented in a similar manner to DVDs, and to the Sony Pictures Entertainment discs I have acquired: it has the usual main menu which you enter when you start the disc. But the other three discs mentioned are different. When you insert the disc, it runs the 20th Century Fox logo, then it runs it again. But the second time, the logo is actually the start of the movie. Initially I thought it was skipping the main menu and running the movie immediately. But when I hit the menu key, I just got the red no-go crossed circle at the top right of the screen. Turns out that there are no main menus on these movies. Everything is done through the popup menus.

Mind you, these are test discs, so the final product may be different. But that seems unlikely since everything else seems to be present on these discs.