A few weeks ago I went looking for a ten metre HDMI cable so it would fit nicely with my bundle of analogue video cables. Until then I had been using a five metre cable that barely stretched from receiver to projector.

But there was a problem with my search. The only ten metre HDMI cable I could find in Canberra was a Belkin PureAV cable. The marked price? How about $500+!

Fortunately, a few weeks before I’d read about an Australian company in one of the magazines for which I write (Connected Home Solutions, a trade magazine not generally available in newsagencies). That company was Kordz, which specialises in HDMI cables (plus it has quite a range of quality analogue cables).

So I lodged an order with a company called HT Custom Cables for the cheaper version of the ten metre Kordz HDMI cable. Cost? $159! The silver ‘Diamond’ version costs over $200. 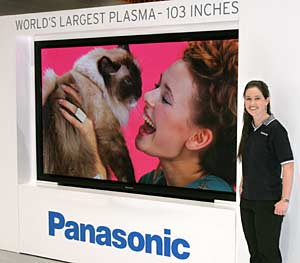 I can recommend both companies. Kordz is one of only a handful of cable companies that is officially licensed by HDMI Licensing LLC, which owns the technology. And the cable works perfectly. As it happens, Kordz offers passive HDMI cable lengths to 25 metres, and active ones (with in-line repeaters) to 40 metres. As for HT Custom Cables, it sent the following email on receipt of my order:

Some good news, we are out of stock of the Krystal 10m HDMI cable you ordered, new stock isn’t available from the supplier for 2-3 weeks.So we have given you a free upgrade to the silver plated Diamond cable, enjoy.

Now, that’s pretty good service. A couple of days later I had the cable. It works perfectly.

Incidentally, I was at the CEDIA Expo at the Gold Coast over the weekend (thanks to Panasonic for taking me there, as well as to the second match of the Bledisloe Cup). Panasonic was showing off several things, including its monster 103 inch (2.61 metre) 1080p plasma display. Pretty good display and bigger than lots of front projector screens. But how do you get it into a home? It also was demonstrating its new control features between an LCD TV and the DMR-E65 DVD recorder, which uses the HDMI connection to allow control of one device by another. I took a peek and the cables used were Kordz.

Is there any point in making sure that the HDMI cables you purchase are properly certified? Who knows? But it may be a while before problems with some substandard cables are disclosed. HDMI can carry video up to 1080p, which may well demand greater bandwidths than 1080i that all current HDMI cables can carry (depending on the frame rate used). Remember, the video is full decompressed digital, so if you double the picture resolution, you double the data demands on the cable. So be careful. A cheap cable may well work beautifully even for 1080i, but may not work for 1080p.

This entry was posted in Cables, Equipment, HDMI, Value. Bookmark the permalink.