Posted on February 4, 2008 by Stephen Dawson

In the last item on the HD cricket broadcast I referred to the appearance of MPEG macro blocking in the picture from time to time. So what is macro blocking?

I don’t pretend to fully understand the maths behind it, but MPEG2 video encoders do work in blocks of data (typically 16 by 16 pixels) as an intermediate compression step. When something doesn’t work too well in either encoding or decoding, the 16 by 16 pixel blocks remain to some degree visible on screen. It most commonly occurs during fast action, or subtle moving surfaces, such as video of rippling water.

So that you can easily recognise it, below is a frame taken from the same cricket broadcast. Note, that the picture was not continuously so afflicted. But this did flash up from time to time, generally during very fast and complex scenes (there was quite a bit near the start when the camera was panning over the crowd).

The top part of the picture is the full frame, scaled down to fit on this page. Despite that scaling down, the macro blocking is still clearly visible. The bottom part zooms is simply Adam Gilchrist’s face cropped out of the top picture, but this time not scaled. You can see how obvious the problem looks. Note, it is complicated a bit by the fact that the video of the cricket was 1080i — that is, interlaced, so that there are actually two sets of blocks. 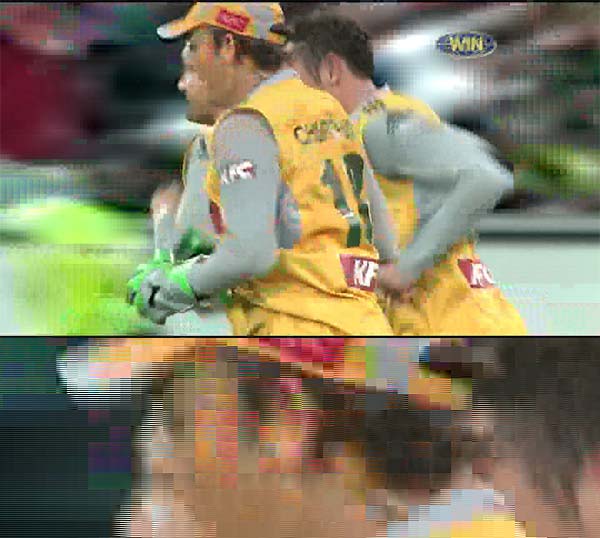 This entry was posted in DTV, HDTV, Video. Bookmark the permalink.