Posted on February 2, 2008 by Stephen Dawson 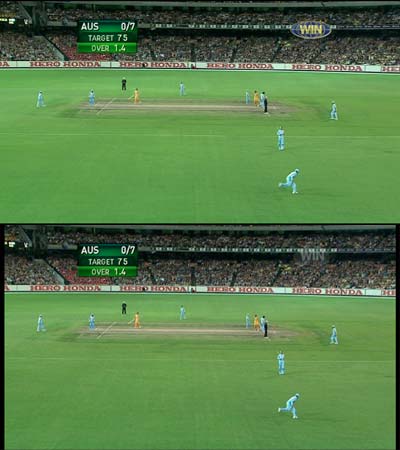 At long last the first cricket match to be delivered in high definition in Australia was broadcast. This was the 20/20 match between Australia and India, played at the Melbourne Cricket Ground. Australia won handsomely.

Let us have a brief look at how these compared. First there are the full frames: HD at the top, SD at the bottom. You will notice that for some reason the SD picture is cropped a little to the left and right, whereas the HD picture extends to the extreme left and right of the frame.

But how does the picture stack up in an overall sense?

First, there was a fair bit of MPEG macro blocking from time to time on the HD picture. In comparable places in the SD picture, there was none. This tended to occur during extremely complex scenes (such as horizontal pans across the crowd, and during a strobe light sequence while the band was playing between innings.) I did notice one severe example during a replay of a closeup of a player running fast.

Aside from that, the HD image was much, much better. Mind you, I was watching this with a front projector (the new Sony VPL-VW200, LCoS, full HD – it still isn’t on Sony Australia’s website). The whole thing was much easier on the eye, with excellent detail. In the closeups to follow, you might see a little MPEG noise. This wasn’t noticable on screen. Basically, the picture just seemed more coherent, hiding the parts of which it was composed, unlike the SD image which made it clear that this was a slightly blotchy capture of something happening far away.

Now let us look in more detail at just one detail. 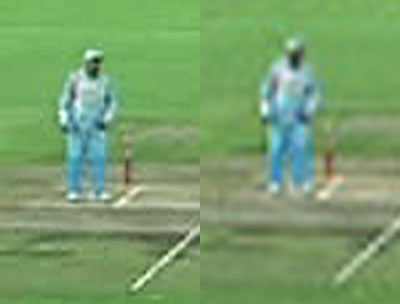 This is a zoomed in detail showing the Indian cricketer at the left hand end of the wicket near the stumps.

You will see that on the left side (from the high definition image) that he is looking down the pitch. On the right side it is impossible to see what he is doing. In fact, if anything, it looks like he is facing towards the camera. Obviously the other details are also far sharper in the HD image.

By the way, in creating these pictures, I imported digital recordings from a Beyonwiz DP-P1 HD PVR directly into my computer via the network. I found comparable frames in the HD and SD versions. I copied those frames into Photoshop. Then I deinterlaced both of them using even fields and interpolation. I then scaled the SD version from 1,024 by 576 pixels up to 1,920 by 1,080 pixels, since this is what a HD display device would do.

For these details, I cropped down to the relevant details and then doubled the size of them to make them easier to see on screen. If you want to do closer comparisons yourself, the two original frames (except that the SD has been scaled up in size and both have been deinterlaced) are here for the SD, and here for the HD. These are about 400kB each.