Posted on September 8, 2007 by Stephen Dawson

Someone on the DTV Forums recently posted a snippet of an ABC test pattern that he’d captured from ABC 2 digital TV. It’s 38MB, but he also posted a shorter trimmed version coming to 8MB (link here).

That snippet is going to take its place on my DVD suite of deinterlacing test patterns. I’ve just done a couple of tests to see how it is affected by different deinterlacing techniques. See the following graphic. 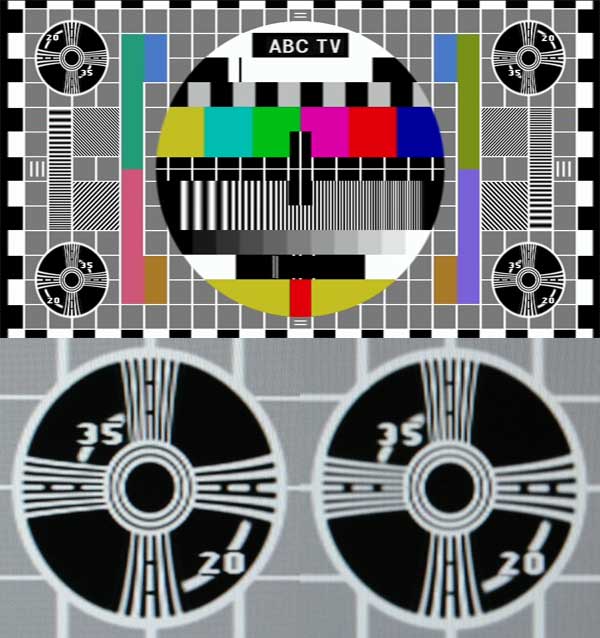 Obviously the top section is the whole pattern. The bottom two sections are closeup photos I took of my computer screen showing this pattern played in Cyberlink PowerDVD. I photographed the bottom right resolution circle. The one on the left is with deinterlacing forced into a simple weave. The one on the right is with bob deinterlacing.

My claim that bobbing reduces sharpness and resolution appears to be borne out here. Look at where the white line to the right of the circle abuts the one to the left of the other circle. Check out the seven white lines on the left side within each circle. Look at the definition around the digits, especially where they cross the curved lines.

Now look at the vertical curved lines. There’s really nothing much to pick between these in the two pictures. Likewise, look at the ‘hole’ in the centre of the ‘0’ in ’20’. Pretty much the same. Bobbing does not affect horizontal resolution, only vertical resolution.

As it happens, I took these photos from my computer monitor because I presently don’t have any way of properly producing a ‘weave’ through my system as set up today. Soon I will be obtaining a DVD VP50 Pro which will enable me to replicate this on a projector, and I’ll do so then. But I am confident that the HD set top box on which I played this was using bob deinterlacing. As well as being soft, there was a vertical jitter in the horizontal lines.

As it happens, this particular video is interlaced, but there are only three small areas of the screen which are moving. The main part is the two vertical lines in the horizontal black bar near the bottom of the large circle. These move horizontally across the width of this black bar, bouncing back at each end. In fact there is only one line, but because this is interlaced the line is completely separated in the two fields and appears in this shot as two lines. There are also a couple of hard-to-see pale coloured scan lines that swap around between each other at the edges of the background section. These can’t be seen in this shot.

A good motion adaptive deinterlacer will bob these moving sections of the picture, but weave the rest producing mostly the higher detail seen in the ‘weave’ detail at the bottom left.

This entry was posted in DTV, How Things Work, Interlacing, Video. Bookmark the permalink.