Recent Universal Blu-ray discs have a ‘Ticker’ feature on their menu system. Sort of.

The ticker is a bar of text in the top right part of the screen and it is supposed to display some messages that came with the disc, plus additional stuff it downloads from the Internet. But these don’t seem to work properly here in Australia.

Here’s the screen I see when I put on the Inglourious Basterds Blu-ray: 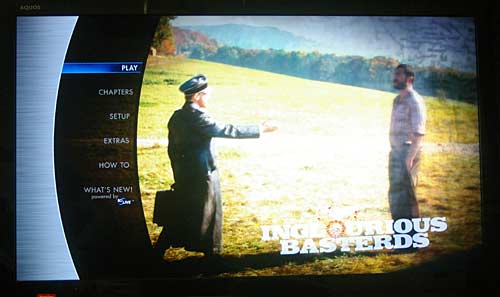 That’s on any one of three different BD-Live Blu-ray players. As you can see, there is no ticker, nor a menu option for it. But here’s what I see if I first switch off their BD-Live capability: 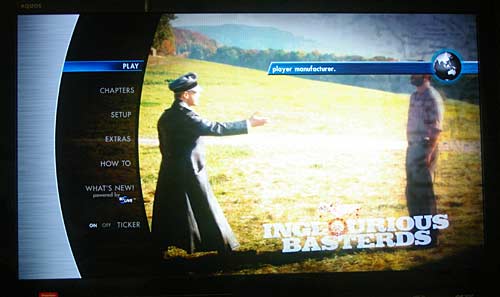 My theory, which I’ve mentioned in my forthcoming Sound and Image review of this disc, is that there is material mentioned in the Ticker which Universal doesn’t consider appropriate for Australia. Say, release dates of new discs and so on. So what it does is on the disc being inserted, it attempts to use the Internet connection to find out where in the world it is. If it discovers that it is in Australia, then it switches off the Ticker capabilities.

But if I have already switched off Internet connectivity, then the disc can’t query the Internet to determine its location, so it leaves the ticker switched on, if only to inform you that you aren’t connected to the Internet:

Ticker message when no Internet connectivity

The problem is, I also tried this with the Blu-ray of  Battlestar Galactica: The Plan, and this switches on the Ticker in either state. In both cases it also reports that there is no Internet available. But this is wrong half the time. When I have BD-Live enabled on the player, I can go from the main menu to the BD-Live menu and log straight on to download trailers and the like. Then when I go back to the main menu, the Ticker still tells me I am not connected to the Internet.

So perhaps there are more complications not yet apparent to me.

This entry was posted in BD-Live, Blu-ray, Disc details. Bookmark the permalink.

1 Response to How’s the Ticker going?