There can be no doubt that The Twilight Saga movies have been financial successes, nor that they are chick flicks, if this term is defined not as a romantic comedy, but as a movie that appeals significantly more to females, on average, than to males. What’s interesting is that the makers appear to have recognised this and stuck with their strengths, rather than trying to even it up.

My evidence for this?

Here is the IMDB voting screen for the first installment, Twilight (average score 5.7):

As you can see, both male and female votes fell, but the male ones far more sharply, opening up the sex gap from 1.4 to 1.9. Now here are the early figures for the third movie, The Twilight Saga: Eclipse (4.5): 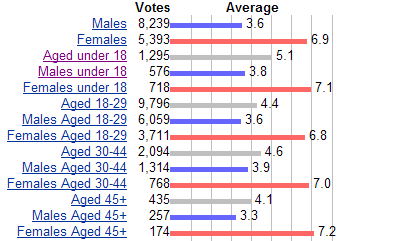 Yes, the girls actually like it more than the first one, while the guys like it less than the second. The gap is now 3.3. I included the age categories under this one so that you can see it is consistent for the sexes. And I don’t think it’s anything to do with acting, cinematography or such. The surprisingly extreme dichotomy of votes suggests that you either ‘get it’, in which case you give it ’10’, or you don’t ‘get it’.

Females tend to get it: