The recent proliferation of second and third TV stations for the major broadcasters has brought some interesting material back to our TV screens. There are a lot of broadcast hours to fill up, and low cost content must be especially welcome.

Yesterday I stumbled across one. ‘7Mate on Prime’ — the third Channel 7 affiliate station — was showing the 1969 Australian TV show, ‘Riptide‘ (the episode ‘One Way to Nowhere‘ to be specific). For some reason the title was extremely familiar to me, although I have no recollection of having seen it. It turns out to be a waterside action drama, or at least that describes the episode that was on yesterday.

As it happens, it was filmed (and clearly it was film) in colour, even though Australia wasn’t to have colour TV for another six years. Perhaps they were hoping to sell it overseas. 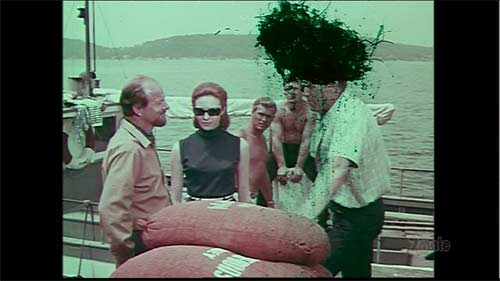 Okay, I picked one with a particularly bad splotch on it, but there are scratches throughout, and that appalling colour balance, and a very soft look, and green tinges around the edges of many objects.

Presumably being shown on a TV station’s third channel isn’t lucrative enough to justify any restoration work at all. Even if that third station is a HD one!