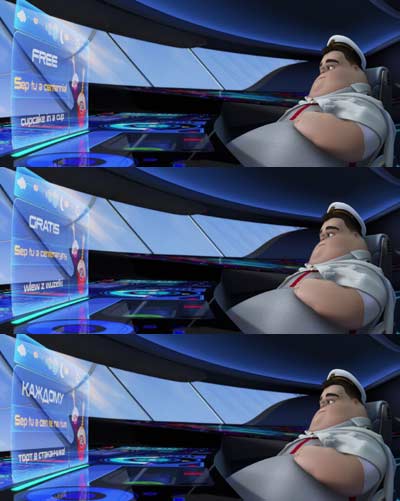 I was scanning the Blu-ray version of WALL-E with BDInfo and discovered that it is organised very differently to the US one. That one apparently has the movie, with a run length of 1:37:25 in a single file (20000.M2TS). The Australian one has, incredibly, fifteen playlists for the movie. These range in run length from 1:38:11 to 1:38:41. Each playlist lists 47 files. The longest file runs for 24 minutes. Most run from less than a minute up to 2 or 3 minutes. The ‘STREAM’ folder of the disc contains 172 *.m2ts files! The largest is around 6GB.

The image to the right demonstrates that this indeed is the case. I grabbed all the ‘I’ frames from three files that fill the same space in three versions of the movie. This is the 17th ‘I’ frame from, in order from top to bottom, files 00093.M2TS, 50177.M2TS and 50199.M2TS. Note the different language shown on each screen.

Once again, Pixar’s attention to detail is impressive. And all those replacement bits must have contributed to the disc having nearly 9GB more data than the US one.