When I was on the scrounge for Blu-ray discs last year (it’s difficult reviewing Blu-ray players when you don’t have any discs), I hassled various movie distributors until they shot a few my way. One company to come through was Twentieth Century, which sent 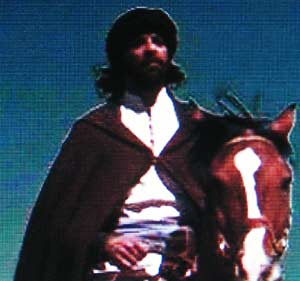 over a bundle. All of them were so-called ‘Test Molds’, including a copy of the first dual layer Blu-ray disc, Kingdom of Heaven. The only problem was this disc was very flakey. It only occasionally worked at all in the first two Blu-ray players I tried, the Samsung and Panasonic models. And when it did work, it would stop half way through the movie.

Naturally I took the opportunity to try it out in the new Pioneer player. With this player — and the LG Super Multi Blu hybrid Blu-ray/HD DVD player — it started properly and promptly every time I inserted it, but with both players it also stopped halfway through.

So what’s up with this disc? Perhaps it’s faulty, or perhaps it doesn’t contain the second layer at all. In any case, with every Blu-ray player it stops in Chapter 32 at precisely 93:38.

But there’s another fault with this disc, one which may well transfer through to the release version: a halo. At the start of Chapter 17, a couple of the characters are riding their horses to some town (I haven’t actually watched the movie yet, and won’t until I get a working copy). I happened to pause the disc on this scene, and was amazed! Truly, the sloppiest cut and paste seen in a big budget movie.

This ‘halo’ was apparent through most of this short riding scene, but didn’t seem to appear in any of the other places in the movie I sampled, including many similar scenes. But notice how deep the blue of the sky is in the shot I’ve placed here. The only way you could film that live would be with a polarising filter and, in my experience, this scene’s sky is too deep a blue even for that technique. So my guess is that the film makers decided that the sky was too light in this scene and decided to deepen it in post production. But not very well.

Interestingly, so far as I can tell, no one else seems to have noticed this.

This entry was posted in Blu-ray, Disc details, Testing. Bookmark the permalink.