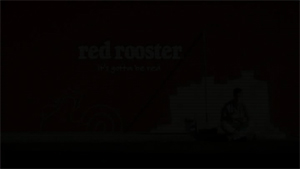 Over the past couple of months, I’ve noticed that Canberra’s Southern Cross Ten TV station is doing something rather strange. In the usually black space of a few seconds between the end of a block of advertisements and the recommencement of a TV program, it has been inserting eight to twelve dark — but not blank — frames. These show a very darkened few frames from an advertisement. Sometimes it is a commercial for some product, sometimes it is part of one of the station’s self-promotional logos.

The picture to the right is an example of one of these. It initially looked like a black box, but that was due to my eyes washing out the dark detail because of the slab of white surrounding the picture. So I’ve changed the colours for this entry. Stare at the box for a while. If that still doesn’t work, copy it to your favourite picture editor, pump up the brightness and you will clearly see a ‘Red Rooster’ ad. Analysed with reference to a CMYK colour space, ‘K’ never falls below 90% (K represents black).

I wonder if this is intentional, so some weird technical bug has intruded.