The dirtiest joke ever on prime time TV? 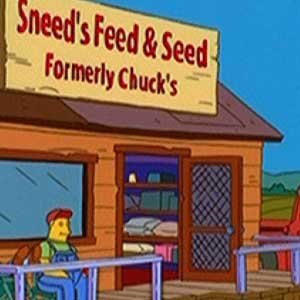 We all know that ‘The Simpsons‘ is hilarious. And it sometimes pushes the boundaries for taste, usually for those who don’t quite get it.

I recall hearing some young fellow ring up the John Laws radio talk back program last year complaining about how negatively Australia had been portrayed on ‘The Simpsons’. Presumably he was talking about the episode ‘Bart vs. Australia‘ (Season 6, Episode 16), in which Bart has to go to Australia to receive the alleged traditional punishment for his misdeeds of the boot in the behind. Of course, ‘The Simpsons’ is just as unkind to the French and the Albanians, the Japanese, the Scots, and just about every other nationality you care to name, not the least Americans.

But the immediate reason for this post is that this evening, at 6pm, the regular repeat episode of ‘The Simpsons’ was ‘E-I-E-I-(Annoyed Grunt)‘ which contains what James Lileks once called ‘the filthiest joke ever broadcast on network TV’. I certainly didn’t get it until I read that post. Do you?