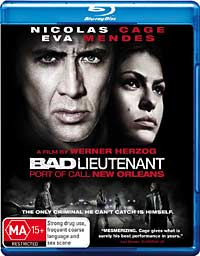 First, like a lot of Roadshow’s titles it is Region Coded B (it often has geographically limited distribution rights, and I suppose it is contractually required to do what it can to keep within those borders). Sometimes region coding is implemented in a way obvious to software, so AnyDVD HD can immediately report on the region code, but most often it is more subtely applied, in which case AnyDVD HD reports ‘Note: automatic detection of region code not possible with this disc’, as it does with this disc.

That isn’t unusual. I work out the region code restrictions of a disc simply by playing it in PowerDVD with the region code explicitly set in AnyDVD HD to first Region C, then Region A (I assume Australian discs will work in Region B!) Every Region coded disc for which I’ve done this pipes up straight away to complain that the player’s region code is incorrect.

But not this one. It plays the Roadshow video logo, then it displays the copyright information panel, and then brings up the main menu. Only if you try to start the movie proper, or one of the special extras, does it throw up its complaint and refuse to let you go any further.

The other unusual aspect? The main audio is Dolby TrueHD 5.1. The embedded legacy audio (which I’ve previously, and incorrectly called ‘core’) is Dolby Digital, as usual. But not Dolby Digital 5.1. It is Dolby Digital 2.0, yet is still gets a full 640kbps encode, so clearly it wasn’t used to save space.

This entry was posted in Blu-ray, Disc details, Region Coding. Bookmark the permalink.