Posted on September 2, 2009 by Stephen Dawson 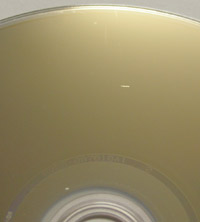 Early this year I foolishly purchased a Blu-ray disc from one of those shops that insist on opening the sealed cases. It wasn’t until a couple of weeks ago that I got around to doing anything with the disc, and what I did do was scan it with BDInfo to gather information for my Blu-ray database. (Yes, I do also watch movies as well! But often the scan comes first.)

The scanning went swimmingly until about 51 minutes into the disc. At that point, BDInfo informed me that the disc was unreadable. I examined the disc and, yes, there it was. Can you see it in the photo? A scratch! About 1.5 millimetres of nastiness.

Not just a scratch, but the worst possible kind for a digital media disc: it was at a tangent to a circle concentric to the disc, rather than radial to it. That means that it essentially obscured a sequence of data over a significant length. A radial scratch (ie. radiating from the centre outwards) obscures just as much data, but only a small amount at each point as it crosses the ‘tracks’. The error correction is generally able to reconstruct the original signal in that case.

But a tangential scratch: if it cannot be read around or through somehow by the laser mechanism, then one this length means too much data is lost for repair.

I was torn. Should I take the disc back or keep it? I put it into a player I had handy, and it made the player stutter and skip until it had gotten past that point. That sealed it: I decided I’d better keep the disc. Clearly, it was an ideal test disc.

Thanks to Warner Bros for sending me a shiny new one to replace the damaged one for its original purpose: data gathering and enjoyment.

Anyway, since this valuable new test has now come into my hands, I have started to use it. Here are my notes for the first two players (no brand names since my reviews haven’t been completed) I tried it on:

The first player was less expensive than the second.

The third player I tried it on was the Oppo BDP-83, which I have on long term loan courtesy of the manufacturer and the Australian distributor. Here’s my note:

Who would have thought that a player could make so much difference?

This entry was posted in Blu-ray, Testing. Bookmark the permalink.