When I went to the Sony 3D TV launch a couple of months ago, and to the Panasonic 3D TV launch a couple of weeks ago, both the spruikers of the new 3D technology highlighted the superiority of their system for eliminating crosstalk. At the time, I was a bit dismissive. Suppliers always talk about how their solutions to particular problems are better than the competition’s, but in most cases the competing techs tend to converge towards similar performance levels.

But it has now become apparent to me that avoiding crosstalk in 3D TV pictures is not just important. It is vital.

So what is 3D crosstalk?

The essence of all currently practical 3D video systems is to present different images to the left and right eye. This can be done by carefully colouring the two images and displaying them at the same time, and using coloured filters to separate out the two for the two eyes. Or the same can be done using differently orientated polarisation for the two eyes.

For consumer TVs, though, the various brands have chosen shutter glasses. That means that both the left and right images are not shown at the same time. They are shown one after the other, alternating between the two at least 50 times per second in PAL systems, 60 times in NTSC. The LCD shutters in the glasses stop each eye from seeing the other eye’s image.

If you look at the picture without using the glasses, this is what you see:

This is a scene (on pause, but this doesn’t effect the alternate imaging which creates the 3D effect) from a demo disc. The disc has four short clips from the 3D version of Monsters vs Aliens, repeated eleven times for a total duration of over two hours. It is labelled for shop use only.

Now it it’s pretty obvious that there are two slightly different images overlaid in this. Remember, one eye is supposed to see only one of these, and the other eye is supposed to see only the other. The reason we can see both is that I made my camera expose this shot with a slow shutter speed so it captured both the left and right, um, fields. I shall call them fields for the moment.

Now I have on my test bench right now a 3D TV and a 3D Blu-ray player, and the disc from which this shot was taken. I shall not identify the brand because the result is very disappointing, and it could be that the devices I have aren’t operating properly. I shall chase that down tomorrow.

So here’s the same shot, but with the camera taking the photo through the right lens of the shutter glasses:

Now, you will notice that the image has firmed up considerably, with it much easier to make out the structure of the bridge tower behind the girl, and see that each set of suspension cables consists of two, not three, cables.

But you will also see that there is a ghost to the left of those features. That’s because there is. I’m hoping this TV is defective, because that is major league crosstalk, or leakage, from one eye to the other (the left eye image has the same problem, but with the relative strength of the fields reversed).

The photo fairly represents what this actually looks like. There was some 3D effect, but it took an effort of will to look for it. Instead, the ghosting (all the way through, although not as obvious in lower contrast scenes) distracted my eyes, made the 3D effect quite unconvincing, and make the video difficult to watch because my eyes felt as though they were blurring the image.

To finish, here is a closer view of the bridge tower, with the both-eye-view on the left, and the right-eye-view on the right, complete with marked crosstalk or ghosting from the left eye view: 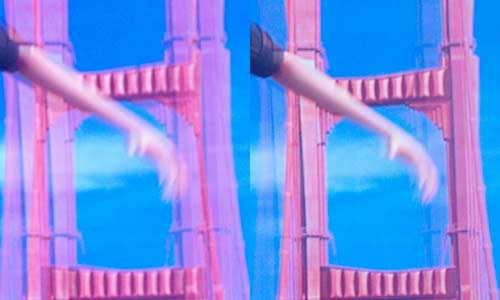 If this turns out to be defective equipment, then I shall actually be kind of happy that I’ve had this opportunity to learn how important crosstalk can be.

If it isn’t defective, then this equipment cannot be recommended.

This entry was posted in 3D, Video. Bookmark the permalink.