I was watching ABC digital TV last night when I happened to notice that the home theatre receiver was indicating that the incoming digital audio was 5.0 channels, rather than the usual 2.0. To double check, I recorded a bit and transferred it over to my computer. 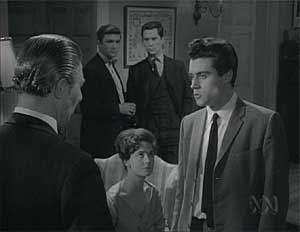 Remember, ABC TV is unusual in delivering two audio streams. There is an two channel MPEG2 stream at 256kbps, and a high bitrate Dolby Digital stream. This runs at 448kbps (the maximum provided on DVDs, although Dolby Digital actually supports up to 640kbps) and last time I checked was in two channel format.

But now, I see, it is delivering 5.0 channels (same bitrate). You won’t notice this unless you have made your set top box default to the Dolby Digital audio track, if available.

Of course, Dolby Digital 5.0 is merely a delivery system. Whether the sound will be surround or not depends entirely on what is packed into those five channels. The show I checked, for example, was a quite forgettable late night movie called The Wild and the Willing. Forgettable except that it was the debut of a number of fine British actors, including John Hurt.

The packing of the stream may be five channel, but of course the content was only mono.

There is one problem with this. I routinely have the input of my receiver to which the set top box is connected switched to Dolby Pro Logic II decoding, so as to extract any surround content that may be encoded into the two channel source. But this won’t work on 5.0 (or 5.1) signals. I doubt that it will with any receivers. So for those shows, it’s necessary to switch back to the MPEG2 audio.

This entry was posted in Audio, DTV. Bookmark the permalink.