A while back I mentioned how I’d found Australian interconnect company, Kordz, to be a very good deal for HDMI cables. I first stumbled across Kordz in an article in Connected Home Solutions (for which I write), which was discussing cables. David Meyer from Kordz had been interviewed and was expressing concern about the quality of some of the HDMI cables on the market.

Naturally I reserved judgement. I could see the point that cheap cables may not carry the bandwidth to support full 1080p signals with multichannel audio, but I didn’t think that this would, in the end, be a real issue.

Well, yesterday I plugged a new Blu-ray player into my system. The signal was fed via a one metre Kordz cable, to a Kordz 5-way HDMI switchbox (the receiver I’m using doesn’t have HDMI switching), and thence via a 10 metre cable to a projector. Everything worked perfectly, even with a 1080p signal at 60 hertz. 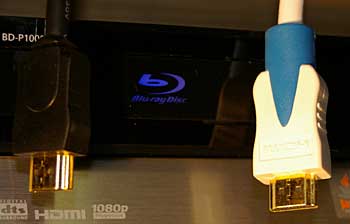 But this afternoon I had to test the player with a same-brand high definition LCD TV, and it was more convenient to use a different HDMI cable to plug it in. I had a relatively inexpensive five metre one I had purchased a while back from Jaycar Electronics that I had used many times with 1080i signals, perfectly successfully. But when I connected the Blu-ray player to the screen and tried delivering a 1080/60p signal, the picture kept flashing bright white across the bottom, occasionally disappearing for an instant to be replaced by noise. The audio also dropped out.

So I switched the BD player to 1080i output, and everything was fine. Back to 1080p, and the problem was again apparent. I then swapped the cable for a three metre cable of the same make (the code numbers on the cable’s insulation were identical) and this worked fine at 1080/60p.

So there you have it: cable quality is very important with HDMI. With a cheap cable, even five metres is too long for the high bandwidth demanded by 1080p/60. The dot clock frequency for 1080/60p video is 148.5MHz, which gives an idea of the bandwidth required.

For the moment I’ll be sticking with Kordz cables.