Posted on February 5, 2005 by Stephen Dawson 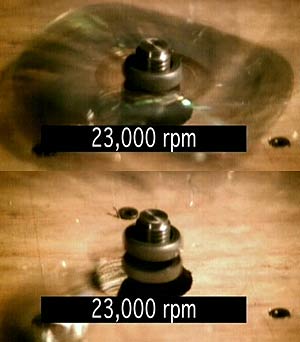 Since it started up on SBS here in Australia a few weeks ago, I’ve been keenly watching MythBusters. Scientists the guys aren’t, but I do like the way they just whip up a test rig from whatever they have laying around. In case you haven’t seen it, each week the two chaps take about three urban legends and put them to the test. Will a mobile phone ignite a petrol station? No. Will eating several poppy-seed buns make you show positive on a narcotics screening test? Yes.

Last week the final segment was testing the Killer CDs myth. Will CDs blow up from centrifugal forces if spun too fast? Well, of course. Anything will blow up if spun too fast. The picture to the right shows two sequential frames from a high speed camera they used to record the demise of a damaged CD (it had been microwaved!).

Unfortunately, they left the impression that a 52x CD ROM drive actually works at 52x. In fact, it works up to 52x, and generally much slower, because it is designed not to go much above 10,000 RPM.

You can read my analysis of this issue here.

This episode of Mythbusters will be repeated on Monday (7 Feb) at 5pm.