Saving the world, 13 grams at a time 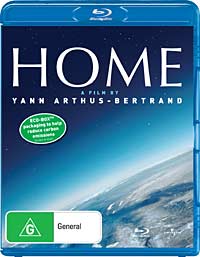 Universal studios sent me a bunch of Blu-ray discs recently. One of them is a movie of which I had never previously heard. Called Home, it is apparently an environmental documentary. From the blurb:

In 200,000 years, humans have disrupted the fragile balance on which Earth was living for 4 billion years. Global warming, shortage of resources, endangered species: humans are jeopardizing their own living conditions.

From the very quick look I’ve had so far, it seems to have lots of glorious cinematography of different parts of the world, both natural and human made.

(Tech info: the video is presented in 1080i50 format using the VC1 codec and enjoys a pretty healthy video bitrate of 26.8Mbps.) 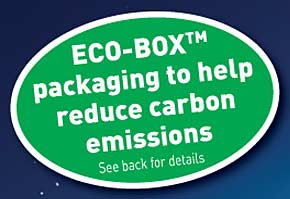 Now your eye may be drawn to that green oval on the front cover of the box. Mine was. What does it say? Well, there it is to the left.

The packaging apparently assists with the salvation of the world.

But how precisely does an ‘Eco-Box’ (TM, of course, mustn’t forget the trademark!) do that. Well, it invites us to see the back for details. And what does the back tell us? Let’s see:

Why, it tells us primarily that the box uses less material, is recyclable and, more importantly, results in a ‘20% reduction in carbon footprint compared to standard Blu-ray packaging.’

So how do you reduce the carbon footprint by 20%? Perhaps by reducing materials by 20%. One way to do this is to leave holes in the product. A normal Blu-ray box consists of the hard transparent-but-blue plastic of the case itself, largely covered with a non-blue transparent thin plastic slip, under which is placed the paper sleeve.

This box has sections missing from the hard blue case, as though it were a racing car where drilling out a few kilograms here or there could make the difference between winning or losing. Here’s the result: a regular Blu-ray case (from a Universal disc included in the same batch) on the left, and an Eco-Box (TM) on the right: 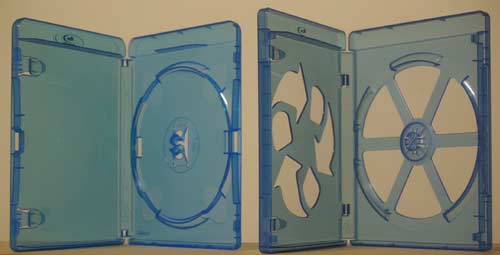 This, and possibly the material changes, mean that the case as shown weighs 51 grams, whereas the other case weighs 64 grams. That weight saving comes to — to two significant figures — twenty per cent.

I’m sure that will stop us from ‘jeopardizing [our] own living conditions’.

This entry was posted in Blu-ray, Mysticism, Rant. Bookmark the permalink.

3 Responses to Saving the world, 13 grams at a time