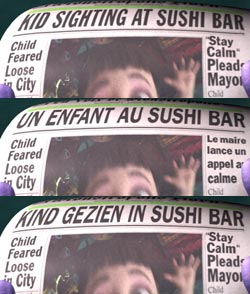 As I’ve previously noted, Pixar uses one technique or another to offer the same visual written content in different languages to match the selected audio language. More precisely, it matches the language you select on disc startup, not whatever language you happen to choose for playing back the movie. For WALL-E it uses seamless branching, for Ratatouille it uses angles.

For the Blu-ray version of Monsters, Inc. it is seamless branching again. For example, the newspaper headline to the right shows the matching frame from the three different streams: English, French and Dutch/Flemish.

All the other text on the newspaper is in English, except for the subhead in the French (but not the Dutch/Flemish) version.

In some parts of the movie English is replaced with iconography, thus:

The left side is from the English one, while the right is from the French one (the Dutch one is identical). The ‘Children Scared’ text has been replaced, and the names eliminated, with the scores moved left and bar graphs added. But the words ‘Scare’ and ‘Totals’ haven’t been changed. Later in these scene the scoreboard is out of focus in the distance, and this shows the English version on all streams.