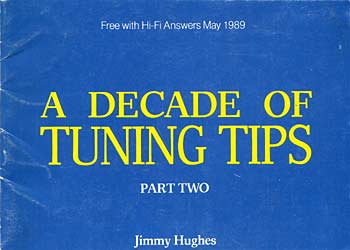 I suspect it was English high fidelity magazines from the second half of the 1970s, and especially the 1980s, that most fostered the irrationality which invaded the world of high fidelity sound. By the end of the 1980s this had reached what I hope was its zenith. I think it has receded a little since then, in large part due to home theatre.

The irrationality depends upon regarding the audio signal as something mystical, yet fragile. It was as though it carried within it some musical essence which could barely make it through into a home by using the most exotic of equipment, and even then only when the gods of fortune were favourably disposed. The sound system was not so much a way of reproducing the sound, but a series of impediments to its proper realisation.

Fortunately, our intrepid audio journalists were there to recommend ways of removing impediments. One way was to improve the equipment: the source first, then the amplifier, then the loudspeakers last. While traditionally the speakers have been regarded as the bottleneck in the sound reproduction process, the hardest part of the reproduction chain to get right, our new audiophiles felt that improving speakers was pointless early in the process, because better speakers would merely explose flaws in the turntable or amplifier (this was mostly before CDs).

But they were also ready to suggest inexpensive improvements, each of which could yield huge improvements. Of course, words like ‘inexpensive’ and ‘huge’ depend very much upon context. Consider a power supply filter: ‘At £299 plus carriage it’s not expensive’. For this modest amount of money the improvement in sound was, apparently, obvious (‘the sound seemed to grow richer and deeper tonally, with a more dynamic “out of the box” presentation’). Likewise, upgrading the digital clock of a CD player (only £141) apparently delivers ‘big gains in resolution clarity and precision‘.

And sometimes, they suggested tweaks that were truly inexpensive — free, even. Some of these were outlined in ‘A Decade of Tuning Tips (Part Two)’, a small booklet enclosed in the magazine Hi-Fi Answers of May 1989. I’ve held onto this booklet these last two decades because I like to be able to remind myself from time to time how utterly silly humanity is capable of being.

A shall discuss its contents over the next few posts. But at this point, it largely concerns the theories and consequent practices of one Peter Belt. This story isn’t about Belt, though. It’s about an industry where such utterly nutty ideas are not only entertained, but accepted and republished.

This entry was posted in Mysticism, Rant. Bookmark the permalink.