The next big advance?

So it turns out that Peter Jackson is shooting his Lord of the Rings prequel, The Hobbit, in 3D and at 48 frames per second. Virtually all filming for cinema is done at 24fps of course, and one of the great things about Blu-ray is that it brought 24fps delivery into the home, instead of the bodges used to show film at 50 or 60 fps.

I reckon the jump to 48fps, if continued, will be the first great jump in 2D quality in cinema since the 1950s, when experimentation with large format filming started. 24fps is subject to judder. The eye can perceive the little jumps from frame to frame at this rate.

Cinematographers overcome this by keeping the shutter speed on their camera’s slow. That way moving objects can appear to be moving smoothly, although this comes at the cost of loss of resolution and clarity. This technique is so important that even computer animation employs it. Here, for example, is a scene from Toy Story 3: 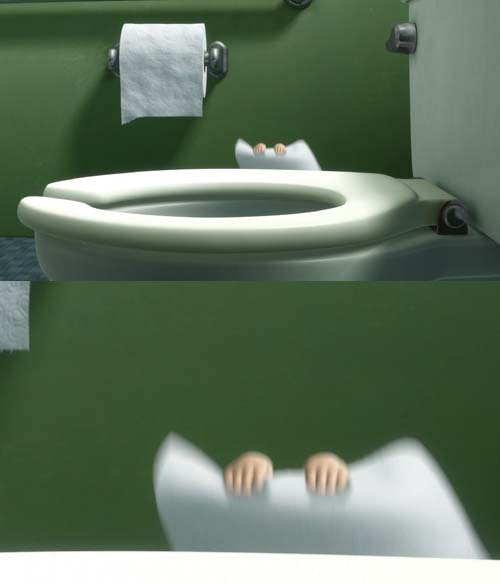 Woody is moving rapidly upwards. The edge of the toilet and the corner of toilet paper on the roll are clear, while he is smeared. Pixar puts algorithms into its rendering software specifically to smear moving parts of the image to eliminate judder.

Now, imagine the clarity that would be available if the frame rate were doubled. The eye has much more difficulty discriminating between two pictures seen 1/48th of a second apart than it does 1/24th of a second. Smoother, more fluid movement is generally claimed as the advantage of an increased frame rate, and there is some truth to this. That’s why frame interpolation motion smoothing systems have been incorporated in many displays. But in practice the real improvement will be sharper focus and greater detail of moving objects and of scenes during camera pans.

The article linked above suggests that there are plenty of digital cinema projectors that will handle this higher frame-rate format. I hope so. But it does leave home entertainment behind.

Blu-ray does not support 48p. Some display devices such as projectors may, but I don’t think the current HDMI standards do.

If 48fps filming and cinema production becomes common, the home theatre must follow. Not just because it is always good to have the same quality as the cinema, but because material shot optimally for 48fps may not look that good at 24fps.

Which also raises the question: how will it look in the thousands of cinemas which use film?

This entry was posted in 3D, Blu-ray, Cinema, HDMI, Video. Bookmark the permalink.

15 Responses to The next big advance?