Twinkles in the picture, but from where?

If you’ve been reading this Blog lately you will know that I’ve been using some inexpensive HDMI cables lately, marvelling at how well they work (ie. just like expensive ones).

But then, last night, I was watching ABC’s ‘Media Watch‘ just in case, you know. And there on the picture, flashing around Jonathan Holmes’ head, were twinkles: fleeting flashes of light, about a pixel in size.

Now this is a known marker of HDMI cable problems. Because the video is carried uncompressed down HDMI, any lost pixels may end up being filled in by a default white dot.

And there I had been, just going public with how the cheap cables have been working like a dream.

So I decided to go back to the source. I transferred Media Watch from the PVR to my computer over the network. As it happens, I also had a Beyonwiz PVR recording the same thing, so I got it to do it as well.

Then I opened both recordings in VideoReDo Plus and examined the video. Here’s one frame: 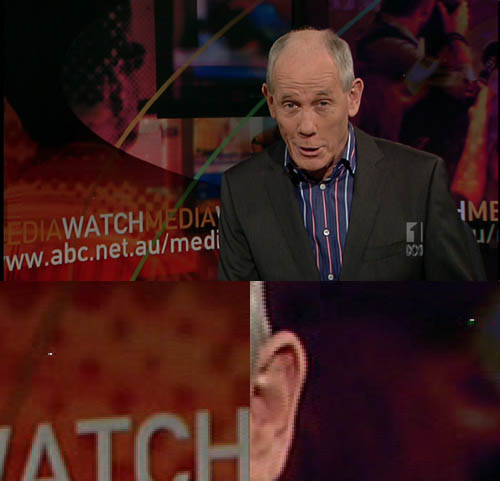 I’ve downscaled the full frame to my preferred 500 pixel width, while the two details underneath are double sized. Those twinkles are definitely in the source. LG, Onkyo, Topfield and the various cables were all innocent.

Incidentally, I couldn’t recall having copied the same clip from two different PVRs to my computer before, so I did a little test. I grabbed this frame from both video files and saved it in .bmp format to my hard disk. Then I went into a DOS box and performed a fc /b command (binary file compare). A few seconds later the command responded: both files were identical.

Not surprising, I suppose. Digital is digital.

But do you think that if you decoded the same analogue TV signal in two different TV tuners and grabbed the results of both, that they would be absolutely identical within the limits of measurement? I don’t think so.

This entry was posted in Cables, DTV, Testing, Video. Bookmark the permalink.

4 Responses to Twinkles in the picture, but from where?