A bigger (longer?) hammer from The Cable Connection

The other day I purchased some HDMI cables from The Cable Connection, following up on my previous post about Kogan’s inexpensive HDMI cables. 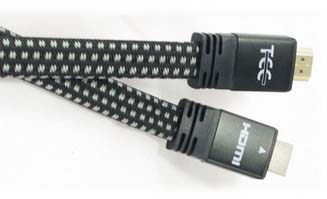 Now I had little doubt that the Kogan cables would work all right. Three metres isn’t a very long run, but it was nonetheless gratifying to see them work fine, especially as they only cost $8 each.

But my experience revealed that cheap cables could run into noticable problems with 1080p60 video at five metre lengths, even though they worked fine with 1080i60. At the end of that 2006 post I said ‘For the moment I’ll be sticking with Kordz cables.’

So I was predisposed to accept that you had to be very careful with long HDMI cable runs. Especially, for example, the ten metre runs I use in my office to a projector. I still figured the hundreds of dollars charged by most brand names for a ten metre ‘High Speed with Ethernet’ HDMI cable was way too high, but what could you do?

Well, check out those available from The Cable Connection. So I bought one. TCC branded and advertised as ‘High Speed with Ethernet’, ten metres, ribbon style, with a nice woven insulation, it arrived on Friday. I ran it over the weekend from home theatre receiver to HD TV. No problems with any signal, including 3D. This morning I put it between the Blu-ray player and the receiver. It set the Blu-ray player to 1080p60 output, and internal decoding of the audio to PCM, and played back a Blu-ray test track with 96kHz, 24 bit 7.1 channel audio.

Looks like high quality HDMI cables don’t need to cost anything like what’s presently being charged by many.

Meanwhile, if you’re after HDMI (or other) cables. Check out TCC’s selection. I also purchased a couple of 1.5 metre ones, which sell for a very reasonable $14.95 each, or about a third of the price you’d pay for a 1.5 metre cable at a department store.

1 Response to A bigger (longer?) hammer from The Cable Connection