In the next Sound and Image magazine I have a piece on the sharpness control in TVs. Specifically, it is a whinge about how many TVs come, by default, with this advanced to a picture-damaging level. I used Samsung as an example, but it is not alone.

The nice thing about the Samsung and the other TVs is that once you’re aware of the problem, you can just turn down the sharpness control (or switch off other edge enhancement ‘features’).

But what if it isn’t the TV, but the content itself that has been distorted by edge enhancement (which is what sharpening, typically, does)? I wrote recently about the first Blu-ray release of the movie Gladiator and compared it with the new version. The first was awful, due to EE. The latter, free of EE, beautiful.

Bad as EE is on Blu-ray, at least there is a lot of resolution available so the lines of distortion are relatively narrow. Unfortunately it is also used on some newly produced SDTV content.

Take, for example, ‘The Bolt Report’. This is a conservative opinion show which appears here in Canberra at 4:30pm on Sundays, but is apparently shown in the bigger cities both morning and evening.

The fact is, it looks horrible. What follows are shots taken directly from the digital transmission, not photographed from a screen. It is possible that this processing may have been added here in Canberra on retransmission, and may not be part of the original production. If anyone knows, I’d be keen to hear.

So here’s a typical wideshot from the program (this is the episode from two weeks ago, 14th August, but it looks pretty much the same as them all). First here’s the whole frame, reduced in size to fit: 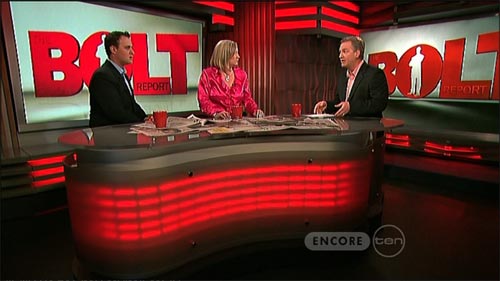 Now here’s a section of that frame at original broadcast resolution. Notice how the edge enhancement has been applied — hell, lathered on with a trowel — around the letters ‘T’ and ‘L’ on the big backdrop? I will pay Mr Bolt’s favourite charity one hundred dollars if those thin white lines alongside the verticles of those letters appear on the actual backdrop. Notice how this process also conjures up distortions in the legs of the Bolt silhouette in the middle of the ‘O’? Notice the jaggies on the edge of the ‘L’ in particular, and also on Bolt’s lapel: 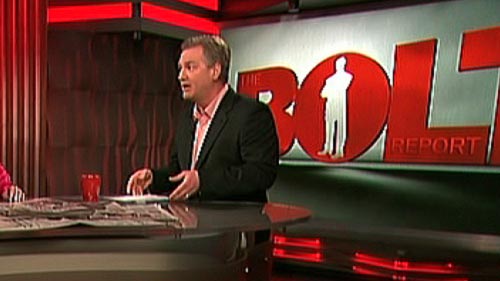 From the same frame, here are his guests, with Belinda Neal on the right. You can clearly see the edge enhancement at her right elbow, but this is only its obvious manifestation. What it also does is harshen the detail and turn the gentle natural variations and blemishes of a human’s skin into blotches. Interviewees on programs such as this get a little light makeup to improve their appearance on the TV screen. Edge enhancement undoes all that and more: 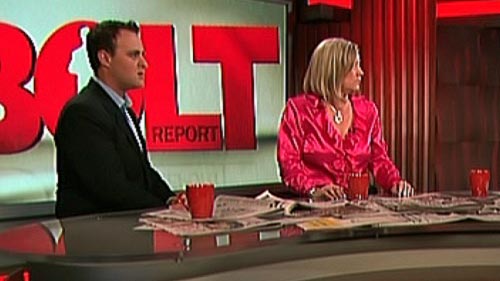 Here’s another full frame from the show, reduced in size to fit: 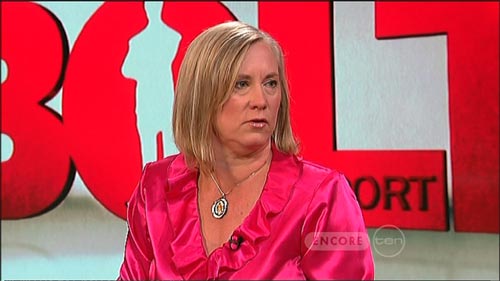 And here’s an unscaled detail from it. Neal’s face is delivered in a way that is oddly harsh on detail, yet strangely vague at the same time. That’s because sharpening/edge enhancement removes real detail in its quest to emphasise the broader differences in picture parts: 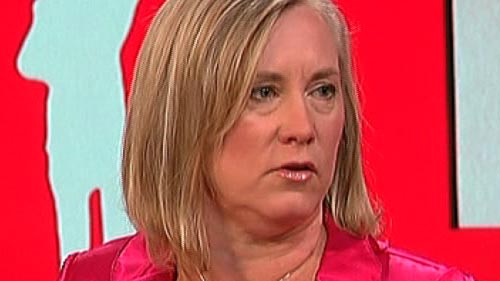 There also seems to be a red colour caste to the program which makes things worse. Most guests seem excessively pink in the face.

Now to contrast, here is Senator Sarah Hanson-Young from the news bulletin that immediately followed ‘The Bolt Report’. First, the full frame: 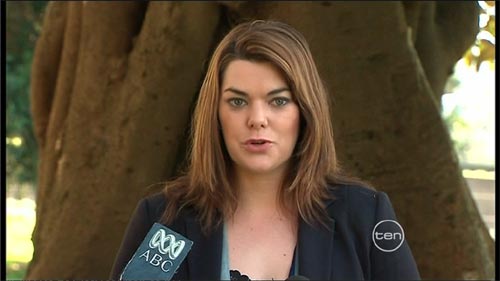 And now a detail, not scaled. Notice the lack of edge enhancement and, consequently, how much more natural she seems. Not as sharp, but definitely easier on the eye: 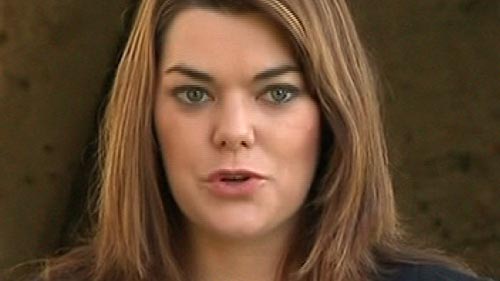 Down with edge enhancement!