Now this was a technique that has in fact been used, even though I had recently come to doubt it.

Indeed, I had insisted here that this technique had been used on a passive 3D TV I had reviewed last year. But here’s the thing: firmware had since changed. I had been unable to get my hands on the same model of TV again to confirm my initial understanding. A couple of websites had insisted that these TVs used Alternate Line Allocation, while an expert in the field had by email suggested that he also thought that likely. My memory began to lose its clarity on the subject and, as I put it in a previous post, ‘by golly I’m irritated that I didn’t apparently take a photo of the Toshiba screen showing this.’

I hate it when I gradually form the view that I’ve made an incorrect interpretation and am feeling that I need to issue a correction.

Which is what I was planning to do today.

But having just taken a series of new photos showing what’s going on with current passive 3D TVs, I stumbled across the photos I took of the Toshiba passive 3D TV’s display back in September last year. And they establish, I believe, that I was right all along. In what follows, I have cropped and scaled, but not otherwise processed these two photos in any way.

The TV was the Toshiba Toshiba REGZA 47VL800A, a 47 inch passive 3D unit. The disc involved was the Blu-ray 3D version of the startlingly inane movie Cats and Dogs: The Revenge of Kitty Galore. To recap: the main menu of this disc is in Blu-ray 3D format (ie. frame packed 1080p24). But most of the picture looks flat. Here it is, scaled down to fit: 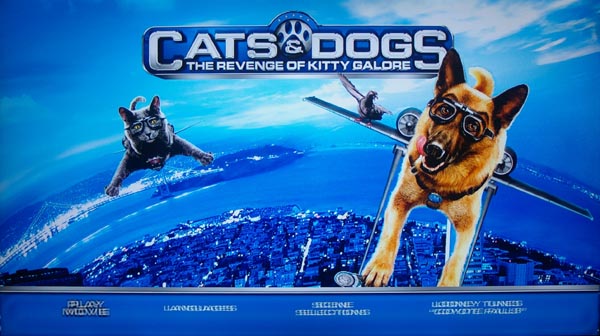 Now I took two photos of this menu on the Toshiba screen. In neither case was the photo taken through the 3D glasses! This is important. What you are seeing is how the electronics of the TV allocates the source lines to the display lines. One of the photos was taken of the screen as presented by the TV without any intervention. The other was identical in every way, except that I had switched off 3D in the TV. That is, the TV has been instructed to ignore (probably) the right eye view and display only the left eye view as though it were regular 2D Blu-ray content.

Now let’s look closely at the menu bar at the bottom. Remember, the source has been created with horizontally displaced words so that they pop out in 3D. But we are not using the glasses, so all we see with the 3D picture are the menu items heavily ghosted. What follows is the same area from the two photos, not scaled at all but cropped down, side by side. The same content with the TV set to 2D on the left (to force only the left eye content to display) and proper 3D on the right: 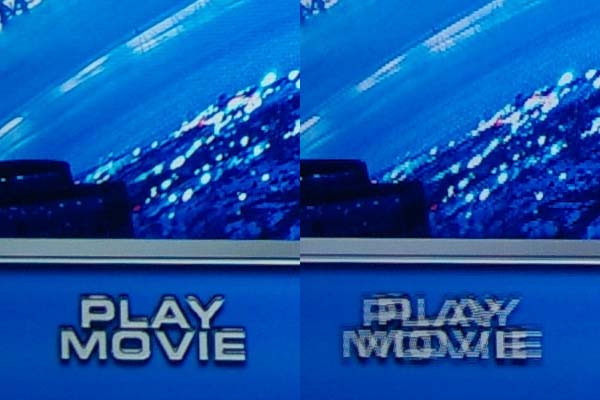 Now here’s a flat part of the picture, arranged as above. Note the jaggies on the cat’s wing and on the title box: 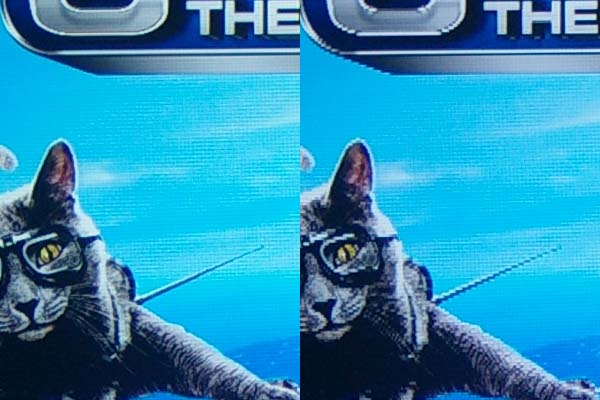 Here’s another detail of the flat part. More jaggies, loss of detail on the bird’s wing, and the detail in the dog’s fur underneath its collar is significantly reduced: 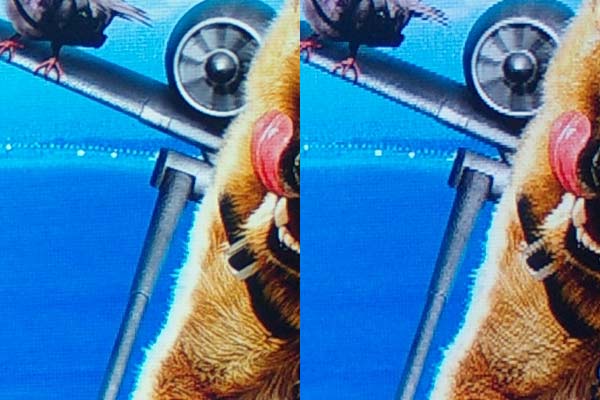 Because of the nearly unique nature of this particular menu display, this is all quite clear. In general perfectly aligned left and right eye views are presented only fleetingly in 3D content, so it’s difficult to dwell on.

This is, I think, the only explanation for this phenomenon. I’d certainly be open to an alternative explanation.

Update (the next day): Actually, now that I think about it, Both Line Allocation would also explain this result. That is, if each odd-even pair of lines is averaged in some way, then similar jaggies would result.)

Note, also, that I have good reason to think that this was also how LG TVs operated at the time. As I said in my review of the Toshiba TV:

I discovered this on the Toshiba passive 3D TV, but went in to my local Harvey Norman and confirmed that the performance on an LG passive 3D TV was the same.

That was some time between 12 September 2011 (when I took the photos) and 19 October 2011 (when I completed the review). I have no idea what firmware was installed in the LG TV I inspected. It was a very big TV.

The two main points of this post are to show that there are strangely unintuitive ways of doing some of these things, and to provide evidence to show that I was likely correct in my initial interpretation, even though for a while I’had been increasingly doubting myself.

However, LG at least has moved and now does things differently.

Unfortunately it is not clear precisely what it is now doing. As we shall see in the next post.