Passive 3D from the beginning – Part 4 – So how does LG work now?

So far we’ve established that at least at one point last year Toshiba and LG passive 3D TVs worked by eliminating all the even lines from both eye views, and showing you only the odd numbered lines, shifting the right-hand lines down by one.

But since then LG at least has changed the way it operates. While I go into it in some depth here, it’s worth repeating what LG had to say about the matter, along with its graphic: 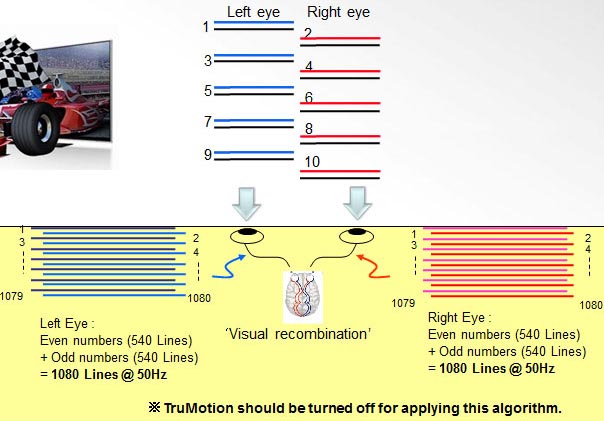 I felt that I had pretty much confirmed this using special test patterns that I created with different colours on each line. I also felt I had established fairly well that this would still result in jaggies.

To put it in the terms I’ve been using these last few posts, LG had shifted to a Both Line Allocation system.

But then I created a different test pattern, and this gave completely different results. The pattern was 1,920 x 1,080 pixels, of course, and fed out of a Blu-ray player at 1080p to the TV. Here’s the pattern, photographed from the screen: 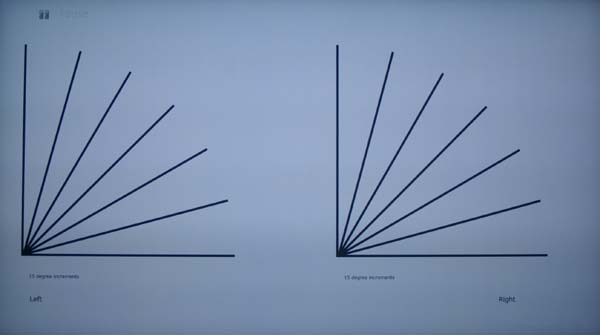 The diagonals on the left and right halves of this are identical and if the screen is cut in half and one laid over the other, they are a pixel-perfect match. All that is to allow them to be displayed using the side-by-side 3D method.

And, indeed, here they are. I photographed the screen in this mode without 3D glasses: 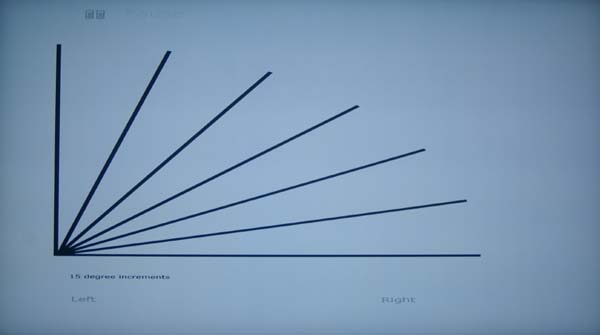 , doubles the horizontal width of each of them and allocates them to the left and right eyes. Since no 3D glasses were in use, what we see here are both eye views at the same time.

Now let’s zoom in. Here I present a closeup of this pattern, processed into 3D using LG’s side-by-side system. The top part is through the right lens of a pair of 3D glasses, while the bottom part is without using the glasses: 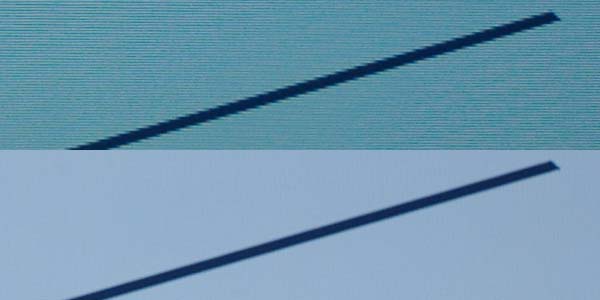 Ignore the colour differences. The polarisation does strange things.

In the top half — viewed through just one lens of the glasses — we see the expected jaggies of course. Remember, with this view half the lines are missing.

But in the bottom half, there are no jaggies. It is clear that every single pixel is present.

Alternate Line Allocation: With this the display throws out L2, L4 … L1080, and also throws out R1, R3 … R1079. Thus there is no shifting. With your left eye you see only odd numbered lines in their correct placement on the odd numbered display lines. Likewise with your right eye you see only even numbered lines, correctly placed on their even numbered display lines. So all lines that you see are in their correct places on the display. But, of course, half the lines are missing.

Which, of course, leaves me puzzled. Does the TV analyse the content and apply different strategies depending on what the content is? That’s the only thing I can think of which would explain this inconsistent behaviour. Perhaps it looks for hard edges aligned between the two eye views and slips onto Alternate Line Allocation based on that?

For now, I shall just invite comment from those who know far more about this stuff than me.

4 Responses to Passive 3D from the beginning – Part 4 – So how does LG work now?