I’ve just been thoroughly berated by the proprietor of a website called ‘The Advanced Audiophile Press‘. He (I assume) did not like my remarks on Peter Belt’s various nostrums for improving the sound of audiophile gear. I have responded to him in comments.

But of course I had a look at his site. It is very interesting. He is admirably up front about what it’s about. As the sticky post at the top says, it is about his:

various thoughts and experiments within the scientific domain of Beltism. Beltism is a relatively new science (discovered by Peter W. Belt), still little known and understood. It deals with energy fields in our environment that affect human senses, by reducing the tension these fields create within us, when around them. This allows us to better perceive sounds, in particular, musical sounds. Among other things, the practice of Beltism can improve our ability to perceive both music and video.

Aside from a USB device that Belt sells which improves the sound of — well, anything you plug it into apparently — the post concerns an easy way to improve the sound of your MP3 files, and indeed the sound of the CDs from which the MP3 files originated.

But you have to do it right. You have to copy the block of digits from the last one to the first one, not the other way around. Or do you? The post says to do it both ways. Also, it should go in the ‘Lyrics’ field ‘to produce a more musical result’ than putting it in the ‘Comments’ field. And if you’re doing groups of songs, make sure you only do odd numbers of them with each selection.

Anyway, if you do that then with each playing the sound will improve. And you know what? ‘By tagging comments on mp3 files with the above message, it is possible to subjectively improve upon the sound of the original CD.’ How’s that!

As he says, ‘This is Beltism, after all.’

Quite aside from how putting anything in particular in a text field in an MP3 file would change the sound of the streaming audio, which comes from a different part of the file, you have to wonder why a sequence of 1s and 0s are used. It suggests to me that whoever came up with the idea felt that putting a bit of binary code into the file might have some effect.

Problem is, whatever 1s and 0s you enter in any of the ID3 text fields ends up as a very different binary sequence. Here is a hexadecimal view of the start of the recommended numbers in the lyrics field of an MP3 track: 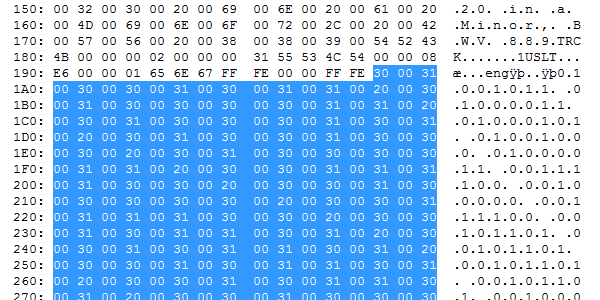 The left column is the line number. The middle two blocks are the hexadecimal characters representing the actual binary. The right column is the ASCII representation of the hex characters (the unprintable codes are shown as dots). I have highlighted the section where the text starts. As you can see, each text character is separated by a 00 null character.

And somehow that is meant to change how the file sounds.

‘This is Beltism, after all.’

This entry was posted in Audio, Imperfect perception, Mysticism. Bookmark the permalink.