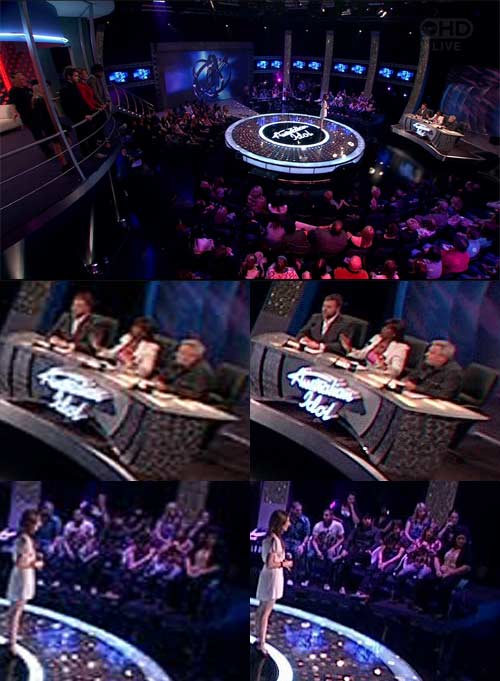 Last night one of the Australian Idol judges, Marcia Hines, was wearing this brilliant jacket. Brilliant, that is, from my point of view. That’s because it was white with a strong, very narrow, closely spaced, near horizontal, black stripe. Brilliant test clip, I thought, especially as it’s interlaced, so I captured a section of the video from both the HD and SD versions of the broadcast and produced a beaut two minute clip consisting entirely of Marcia’s jacket, mostly in close and medium distance shots.

I thought that I might as well do a quick comparison, seeing as I had the stuff on my computer. So this is an extreme wide-angle shot. The full frame is at the top with details underneath — standard definition to the left, high definition to the right. As usual, I used Photoshop to increase the size of the SD version from its original 1,024 by 576 pixels (actually broadcast at 720 by 576 but captured in the correct aspect by my application) to 1,920 by 1,080, because that’s what your HD display would do.

There are obvious differences of sharpness and clarity, and in the HD version fewer and smaller random noise blotches, which are compression artefacts. Most interesting to me, though, was the group of people seated behind the singer. On the right hand side you can, if you are familiar with this year’s show, identify them all. On the left you’d be hard put to identify any.

This entry was posted in DTV, HDTV, Interlacing. Bookmark the permalink.