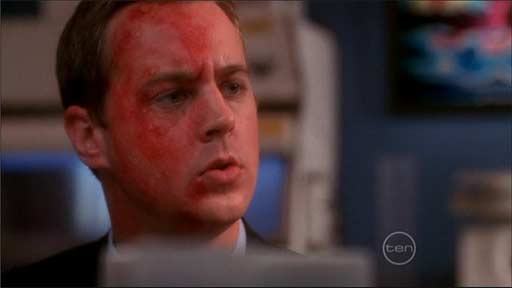 I’m testing a whole batch of TVs at the moment, and have just reached the last of the six of them. One of the first things I do these days with a display is plug a Beyonwiz HDTV receiver into it. Why? Because if you hit the ‘Setup’ key, arrow down to A/V Settings, hit enter, and then hit the red key, the unit displays the Extended Display Identification Data (EDID) on the screen. This is useful information to have, for reasons I will write about one day.

Anyway, I plug it in and switch everything on and the above is the first thing that the TV shows. I have recently been dealing with a front projector which had a habit of losing sync with the colour and it produced results somewhat like this.

Happily, though, the explanation was nothing to do with misbehaviour by the TV. Apparently the poor old McGee character had somehow had his face marked during the course of that episode of ‘N.C.I.S.’. As can be seen by comparison with the unmarred skin of his colleague Abby. 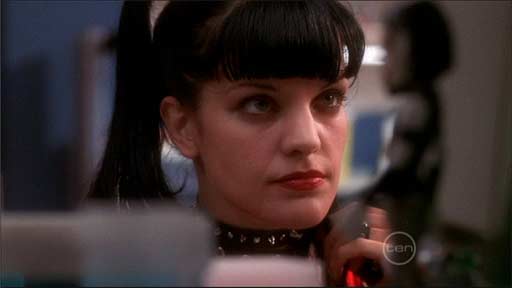 So how did I capture the first image if it was the first thing I saw?

That’s one of the nice things about the Beyonwiz personal video recorders: they automatically buffer the last two hours of stuff that they’ve shown, and if you decided to record something, you have the option of including the buffer.

So I spot the blotchy face. A lump settles in my stomach as I realise I’m going to have to criticise a product from a major brand. Abby’s face comes on and I realise that the blotches are part of the story. I feel better. I decide to write this Blog entry. I hit the ‘Record’ key for the PVR. I select ‘All’. And there we are, I’ve captured the video containing the two scenes above. I hit ‘Stop’. I hit the ‘File’ key. I select HDD. I select the one minute recording I’ve just made. I hit the ‘Pop-up’ key and choose ‘Copy to’. I choose ‘Network’, navigate to the write-enabled folder in my computer where I always send video from the Beyonwiz PVR, and hit the red key. The video copies over the wired network. Easy!

This entry was posted in DTV, Equipment, Testing, Video. Bookmark the permalink.