I’ve previously mentioned the Quick Hitts podcast a couple of times. Dave Hitt has a superbly professional manner and tone in his podcasts on his wide ranging, but generally fairly libertarian subjects. I find a great deal to agree with in his podcasts.

There was one I just listened to this evening, though, to which I think I must take exception. It wasn’t the podcast proper, but more the letter he read out, and his evident agreement, regarding the pointlessness of high definition video, and a slightly over-the-top dismissal of Monster Cable. Download podcast ‘Unintended Consequences’ from this page. Actually, download them all because they make great listening.

First, though, I learned from this podcast that Monster really has been guilty of some horrible behaviour, suing people most aggressively over claimed trademark infringement in a way I think is quite disgusting, and taking a quote from a negative review and reproducing it out of context in its advertising to make it seem positive.

I have my own issues with overpriced cables, and I always recommend against them, including Monster’s products, unless the money is clearly a trivial matter to the would-be purchaser.

Having said all that, back in the early 1980s the company did a valuable surface: it raised public awareness of an issue well-known to audio enthusiasts. That is, that most ‘speaker cable’ was crap. It was all incredibly thin in those days, and if you had for whatever reason a long run, you could easily chew up several per cent of the output power of your amplifier just in the resistance in the cable. Even before that, of course, audio enthusiasts didn’t use ‘speaker cable’. They tended to use twin core power cable, which had much lower resistance.

Since then, a valuable early idea has been perverted, both by Monster itself (with interconnects, which are nowhere near as important to sound quality, and digital cables), and even more so by other so-called audiophile cable makers. As I keep saying, for analogue interconnects, look for something in the $20 range, with good moulded plugs and gold plating (to resist corrosion, and for no other reason), and thickish wires (which indicate proper shielding). For speaker cables I buy the stuff from Dick Smith that sells for about $5 a metre. It’s very thick and very low in resistance.

As to general audio quality, one of the remarks on Dave’s podcast was to the effect that someone’s computer speakers sounded fine. And that’s fine for that person. I have nothing against it, even though I personally prefer more accurate reproduction of the sound, including all its elements. Somehow I doubt that a typical computer system will generate the 16 hertz fundamental of Bach’s Passacaglia and Fugue in C Minor when played on a mighty pipe organ.

As for HD, there was some mention of programs not being worth watching if one can spare the attention to notice the smaller details. But what if those smaller details are part of the story? See, for example, John Travolta’s face in the Blu-ray version of Pulp Fiction, compared to the DVD version: 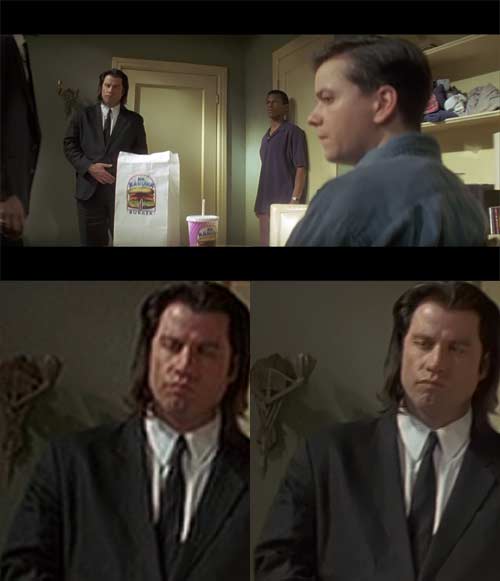 Is the ‘door room’ scene of Monsters, Inc. (somehow, this seemed an appropriate title to compare, seeing as how Monster Cable tried to sue over the title) pleasant to look at on DVD when all the detail mushes up into confusion? 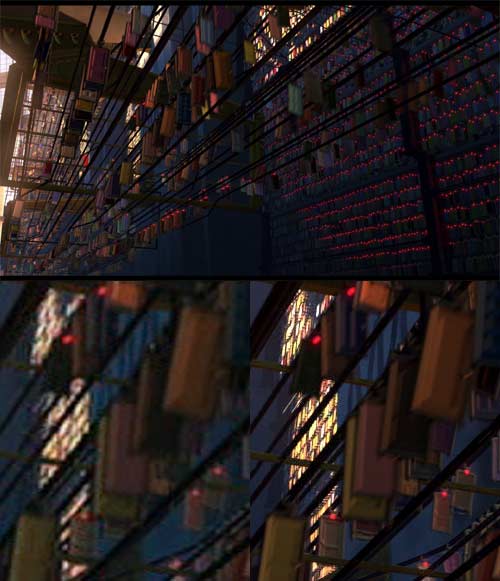 DVDs were great when we had 30 inch CRT TVs. Now we have 50 inch plasmas or LCD TVs, or even 85 or 100 inch front projection screens, Blu-ray and HDTV make the difference between an enjoyable experience, and one in which your eyes are being made tired by either a soft, out of focus image, or one with ugly artefacts of edge enhancement technology.

When HDTV was being introduced into Australia about eight years ago, a prominent commentator launched a campaign against it on the basis that real HDTVs were going to cost $20,000. And he was right … at the time. But as with every technology that achieves mass acceptance, prices fell.

The other day I reviewed a 50 inch Panasonic plasma TV. Full HD. 3DTV support. Glorious picture quality — the best yet, I think. Multimedia playback from USB, SD and DLNA network. Internet portal through to YouTube videos and Picasa photos, plus a number of Web gizmos and room for expansion. Four star energy rating (which I confirmed). Pretty much the best plasma that the best plasma company has to offer: $3,300.

And this time next year, that will seem expensive.

I didn’t try to talk people into buying HDTV and Blu-ray if players when full HD was available only from a $40,000 front projector, or when Blu-ray players were $2,200. But now, in part thanks to the early adopters and enthusiasts, I do. Because the improvement isn’t a subtle imaginary thing, but blindingly obvious on a larger screen.

Australian residents who have persisted this far: I have Luc Besson’s 1988 movie, The Big Blue, available on Blu-ray. No box, no slick, but the real thing. Disc has both the 168 minute Director’s Cut, and the 137 minute Theatrical version, plus a 97 minute SD documentary. First to ask for it in comments gets it.

This entry was posted in Blu-ray, Giveaway, HDTV, Rant, Value. Bookmark the permalink.

4 Responses to Monsters and High Definition